UberProAudio: Every drummer and music aficionado remembers your display on “The Late Show with David Letterman ” in 2004.  Describe to us playing that gig.

Chip: Before I went on I prayed to God to help me and thanked him for getting me there. It was a really big deal to me at the time. And it was really scary, but cool at the same time.

I remembered more as the weeks went by. But the performance itself was a blur. It was a mixture of fear, but also of a “do your best” and “you can do it” feeling. Looking back, to be brutally honest with you, I seriously think God gave me the “do your best” feeling because I asked him to. I try not to ask God for everything. But that was a scary time, and I had to call out!

I only regret that the cameras didn’t show the band yelling and pointing at me when I stopped. They were so cool – the whole band was yelling for me, and I felt overwhelmed and super happy when I finished.  I will remember that the rest of my life.

Scary also because it was so cold. The workers back stage all had parkas and thick winter coats on. Drumming when it’s really cold is a bit unnerving, and throwing and catching drumsticks in cold weather is pretty tough. The thought of dropping my sticks was pretty scary. Plus the fact that I knew if I did drop them, it would also follow me the rest of my life. As well as in front of my Parents, students, and friends.

But even though I was afraid, I loved it. I’m glad I did it. Everyone backstage was laughing and clapping. Loretta Lynn and the guy from the White Stripes told me I rocked, and that was wild to me. David Spade also stopped me in the stairway and said, “Dude! I thought you said you were going to do something stupid? That was cool!”

That was a highlight in my life for sure. It was very scary for me and cool at the same time. I am very grateful I got the chance to go on there. 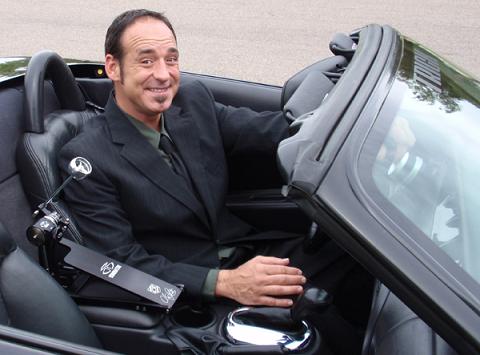 UberProAudio: Can’t help but ask, Chip – what’s with your fascination for snow globes? They’re all over your web site!

Chip: I’m a drummer, therefore I like anything that’s shiny – from diamonds to tinfoil. There’s shiny glitter in them. And I also think snow globes are funny.

The story behind the snow globes is that my friend Kevin Ironside and his wife Sandi collect snow globes. One time at Kevin’s house I asked him, “Hey man, where’s the drummer in a snow globe? Or a drum set? All these snow globes and not one drummer? How come you gotta be a hater, yo’?”

To which he replied, “Well, you should get off your butt and go make some then!”

We talked about how funny it would be, since I juggle sticks, to put myself in a snow globe with drum sticks falling all around. I called my Mom – she got online and helped me find a connection. We made some calls and e-mails. The drummer in a snow globe was born.

They’re really cool, even if you don’t know me at all. It’s a drummer in a snow globe with drumsticks floating around.  Kids really dig ‘em. When I’m with someone that hasn’t seen one yet I usually shake one, then look at the sticks and say “Hmm…Yep!  Looks like you’re gonna have a great day. But you should be careful crossing the street…”

Or something like that, as if I’m “reading” the sticks that fall. It’s pretty fun.

I did it with my Mom’s help. I did it for Kevin and his wife Sandi. They think the snow globes are funny. And I did it for my girlfriend, Carol Tracy, who would tell me, “You’re like Alex in Madagascar.”

She’d act like I was Alex the lion and say, “Check out my webcam!” I did it so I could look over to Carol and say, “I gave ‘em a snow globe. I can’t top that!” So I could see her laugh.

You can visit snow globe chip anytime at my website, http://www.chipritter.com.

Check out my webcam!

UberProAudio: Acclaimed drum tricks. A stint on Letterman. A popular DVD. A successful career as an instructor. What’s next on the agenda for Chip Ritter?

Chip: This summer, I plan on finishing my second DVD with Mel Bay. It’s all about the bass drum, and I can’t wait to tell you guys more when it’s finished.

Also this summer will mark the debut of my first real big band show, where I get to try to seriously play big band music with a 19-piece group in August. Joel Dunst is the drummer and bandleader, and I get to do some double-drum soloing swing stuff that I’m very stoked about.

After that, more drum clinics and regional shows. You know I’ll also be web surfing though UberProAudio.com to check out who’s playing what. Since I’m still kind of a consultant for Trick’s A/R rep team, I always find that information of great interest!

Thanks so much for your time, and thank you UberProAudio.com!

D.F.A.M.
Drummer From Another Mother Clothing