Few drummers can match the showmanship and talent of Chip Ritter. His renowned stick tricks have made him a true musician, performer, and entertainer. Whether he’s filming DVDs, writing books, or teaching students, Chip’s eager to share his secrets and pass on his abilities.

Chip recently sat down with UberProAudio and discussed his gear, showmanship, and inspiration. 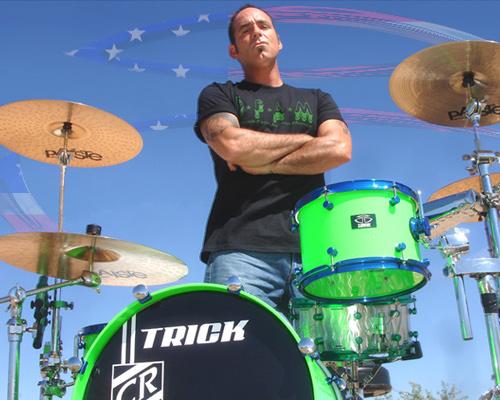 UberProAudio: Thanks for taking the time to speak with us, Chip! What drum kit are you sporting these days?

Chip: No sweat! I’m stoked to be doing an interview with UberProAudio.com, so thank you! I always enjoy checking the site out and learning about who’s playing what. It’s really cool.

I’m currently playing my custom, four-piece neon green kit made by Trick Drums. I now play the Dominator series pedals from Trick, too. Some trivia about the pedal – it looks different than the standard pedal and is only one of three footboards from Trick to ever leave shop with a name on it. One is mine. Another was sent to Chris Adler of Lamb of God.

The other was a Pro V1 model that was laser-engraved for Mick Jagger and purchased from Trick two years ago. Mick doesn’t officially endorse drum gear – the pedal was bought by his “people” for his birthday. He plays drums, too!

UberProAudio: What made you want to spice up live shows with your renowned tricks and stunts? As opposed to just playing straight-forward beats.

That was when I really first got interested in showmanship.

UberProAudio: You have access to practically any drum kit you could ever want. But walk us down memory lane and tell us about your first experience with a drum set.

Chip: My first experience with a real drum set – after all the pots, pans, etc. – was actually a pretty sad memory because of my initial lack of ability on the kit.

I set myself up by so much air drumming and playing on Kentucky Fried Chicken buckets that I thought I was going to be able to play drums much better than I did.  I got super depressed after first trying to play – it was way harder to do what I wanted to do than I thought it would be and, well, I wasn’t naturally capable of playing like some people my age seemed to be.

But looking back, I was twice as motivated as anyone I knew and was willing to do just about anything to really be able to play the full drum set. My mom got me drum set lessons – the first beat I was taught to play was a Cha Cha type beat. I practiced the hell out of it every day, dreaming of one day being able to play like the drummers on the songs my brother listened to at the time – like Alex Van Halen and Phil Rudd.

The first song I ever played in time, from start to finish, was “Louie, Louie.” And I played a basic rock beat along with the recording on my first drum set.  My teacher made a big fuss the first time I got through it, and it was a great day.

If I wasn’t completely in love with drums and drumming before that moment, I certainly was ever since playing through that first song. To a kid who’s trying to play, the teacher’s response, good or bad, is so important. Over the years I am very lucky to have had lessons with some really great instructors who inspired me. That first teacher I had, on that day, with a simple “that was great!” and a high five, changed my life forever in a positive way.

UberProAudio: Let’s talk about your famous drum tricks. How long does it normally take to develop and master one?

That’s a tough one to answer.  I think it depends on the trick or the move.

Showmanship can be just as subjective as music is. I think the attitude, or the way it’s presented sometimes, can be as cool or even cooler than the trick itself. In other words, the spirit or intent behind the trick is just as important as being able to pull it off.

If the stick leaves your hand, the risk of dropping it goes way up obviously. So there’s a big difference between the time it takes to work up a basic move versus something where the stick leaves your hand. If you take one move, like throwing a drumstick up in the air and catching it in time – if you’ve never throw your sticks up and catch them, then that move is going to take much longer for you to get down than other moves.

If a drummer who has never incorporated stick tricks in their playing wants to start, the fastest way to get going is to watch older drummers or the showmanship type drummers and think about when they do their move, why, what’s going on with the song, and so on. Some of them can take quite a bit of time. Others can be done immediately.

The attitude and motivation for simple things – as simple as holding your stick up in the air – can be developed and mastered by someone in as little time as one practice session.  Spinning or faking a spin while holding the drumstick can then be put into your bag of tricks as soon as you can get the spin going, because you started already with holding your hand up.

They typically get more difficult from there. But I’ve seen nine-year-olds incorporate high-held, fake spins while playing in time to great effect – all within two weeks time.

Well, I think if a nine-year-old can do that in two weeks, any adult who wanted to should be able to handle it within four to five weeks. Right? Ha!

Once you get a trick down and find how to use it to express yourself, it starts becoming just another part of your playing.  It’s not like you’d sit there and plan – “On the seventh bar of this tune, I’m throwing stuff…”