UberProAudio: Let’s move onto your recent instructional DVD, “Stick Tricks.” What can both amateur and professional drummers take from it?

Chip: Fun. They can take the barebones truth of how I learn and teach tricks, and save themselves years of messing around with other methods.

I really think there is something in that video for everyone. I would have never put that out or have been able to get it put out by Mel Bay if it wasn’t. I think that drummers can all get some fun from it and learn a few inside “secrets,” or rather personal methods, of getting stick tricks up and running at their live shows.

Whether they use 100 percent of the info or not, the advice is solid. And it’s my personal take on all of it. I doubt many will be juggling three sticks off the bat – that takes some time to get down. But the juggling is in fact explained in there, and the keys to everything I have done so far – all the moves I had done up to that point that actually work in real settings.

That’s what I think they can take from it. And to have some fun. It’s totally FUNstrunctional.

P.S. – funstrunctional is my word. You have to send me a quarter every time you use it. Ha!

UberProAudio: Not only are you a professional musician – you’re also an instructor. What sort of role did that play in filming the DVD.

Chip: It helped me greatly. I got a step up on many drummers who do videos because I got to see first hand the concepts I was trying to teach – what worked and what didn’t. So while every human learns a bit differently, being an instructor helped me cut out a lot of fat and get to the meat quicker of what should end up in each lesson to make the most of the time I was allowed.

I plan on using this method in “The Pedal of Boom” and the coming sequel to “Stick Tricks” that we are shooting now. “Stick Tricks II” gets into even more in-depth regarding overall showmanship and performance. But it won’t be out for another year at least. Mel Bay and myself agreed to release “The Pedal of Boom” video first, and that’s scheduled for Winter ‘09.

UberProAudio: What made you want to teach others as well as constantly perform and be on the road?

Chip: Well, I love drumming. When I see a young drummer who could not clap in time when they first met me – to see them get up and start to play his or her first real song, in real time, by themselves, with no help, sounding great… man!

There’s a moment when they have a realization or become aware of how cool it sounds. And realize that they are the ones doing it. Ultimately, the feeling that I am actually helping another person in some small way is what really keeps me teaching. 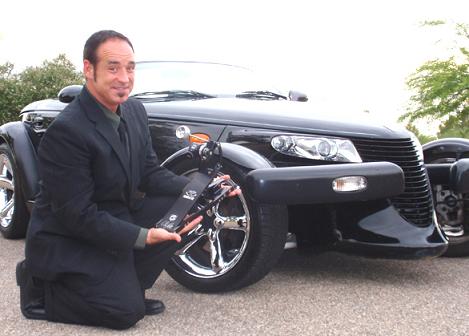 UberProAudio: Talk to us about “The R.I.T.T.E.R Method,” your insightful instructional book. How do your book and your methodology differ from the traditional?

Chip: Well, my book was a big step off the normal, and sometimes trendy, path. I wanted to put it out because, like the DVD, it was the book I had wanted someone to have written for me when I was 10.

Many guys put books out and say, “OK, now go play this.” I was always left with questions like, “OK, but what song first got you into drumming, and why?”  They never seemed to answer that.

Carter Bueford put a video and book out that was four hours long and covered him playing songs from his band’s CD – songs I had already heard. I kept wondering, “Why don’t they ask him about his path? How did he really learn this thing or that thing?”
Many books don’t cover what most of us as consumers really want to know.

Dave Wekle is never going to put a video out with his own truth because he’s too cool for that. I figured I’m not that cool, and the best thing I could offer anyone was my truth about how I got to the point I was at. What took place, how I have learned exactly, etc. I’ve logged my mp3 drum solos for 10 years, and you can hear the progress if you download the Moscow solo from 2001 to the Letterman clip to my recent stuff – you can hear what I was talking about in the RITTER Method working for me.

Anyway, that was why I put it out. Kind of like a bunch of bread crumbs for younger drummers coming up who wondered about what I wondered about and was interested in learning about.

There was and still are no real books like that.

It was my honest and best advice regarding what I had learned on my path of drumming at the time. I put it out in 2000 first, then a second edition in 2002.  I’ve learned a few more things since them, and the chapter on inspiration still applies like never before!

By the way, if someone reads it, they can see I made some predictions about Neil Peart regarding his switch to traditional grip. And they all came true. Like a Nostradamus! Ha!

Then again, I also said I didn’t really believe in double pedals. But I started playing them in 2006. So, I was a bit wrong about that!

If I did it again, there would have to be some “I learned this about that since then’s” added to it.

UberProAudio: You mention following Bruce Lee’s concepts in the book. How does The Tao of Jeet Kune Do intertwine with The Tao of Chip Ritter?

Chip: I got into Bruce Lee’s stuff out of just admiring his discipline, ability, and results.
His way of understanding matched up with Kenny Werners book, “Effortless Mastery”.

By the way, any musician that has ever played any instrument should go get that book now. Reading “Effortless Mastery” will change your life in a good way!

Anyway, the basics are just an ideal I feel has worked for me – Bruce Lee’s concepts of training hard. But then you “forget” your training, not having to think so much but to be, act, and re-act. That’s the heart of what I teach and try to do as well. When you’re thinking too much, you probably don’t sound anywhere near as good as you could if you were to “let go” and “be like water”.

I am far, far from reaching that point still to this day. But I can see results in my playing from solos I did years and years ago to today. And I know I’m still getting better.

I guess that’s how it would intertwine. The more your body and muscles really know, the more space you have to let your higher parts of your brain participate in natural movement. The more honest you can act and re-act.

With drummers, it comes down to base muscle familiarity. Without redundant training, your body has no need to remember. With it, it gets comfortable and familiar. No different than how much easier it is to walk through a house you’ve lived in for years versus a strange hotel you’ve never been to before.

But like I said, I’m not all the way there. I’m still very much a work in progress!