UberProAudio: How do you come up with an idea for particular trick? What inspires you to create something new?

Chip: Listening to and watching players like Johnny Rabb inspires me to create something new by seeing his examples of creativity and his ridonkulous level of ability and skill on the drums.

If someone’s not having fun, I personally find it hard to see how they could be playing the drums. Any trick that doesn’t seem to work is almost always because it was forced or not truthful. Or it came from a lack of motivation or lack of inspiration. Like music – it’s always better if it’s honest.

If you’re not having fun, it’s probably better if you don’t do stick tricks at that time. So I come up with Tricks usually while playing and really getting into a “fun zone,” so to speak. I remember them mostly if I think they were cool, I do ‘em again.

I honestly enjoy throwing stuff. If I’m happy and the sound is right, well, sometimes I end up throwing stuff! Most of the time, it’s nothing more than a side of my playing that I just do because I’m really in the moment and having fun because I’m playing drums.

If I go into a situation playing a very sad or slow song, believe me – at that time, I’m not throwing stuff or spinning anything. I hope that makes sense!

I’m looking at doing some real big band type stuff this summer. That, to me, is the ultimate drumming challenge – where your sound is so key to the sound coming off the stage with those horns.

As far as tricks and moves go, the best ones almost all come from variations of very old moves that the great big band drummers used to do in the 30’s and 40’s. Gene Krupa, Buddy Rich, Poppa Jo Jones, etc.

There aren’t really any drummers like that anymore. Their music was awesome, too.
If there are drummers alive that could even begin to play that way, with a band you know, it would have to be a headcutter.

A ninja-level player like Johnny Rabb. That guy is one of the most underrated masters of our time. And no, I don’t use the word “master” lightly. All drummers who witness that guy play live know what I’m saying and why. He’s got all of it in spades. As far as what I think it takes to be called a truly amazing drummer – the raw skill, the highest technical proficiency, which comes from insane dedication to the instrument. And, in my opinion, that has led him to a freakish, Bruce Lee level of “honest self-expression” with his music and therefore his drumming.

So, as to what inspires me these days, Johnny Rabb’s playing has inspired me to try and become a better drummer. He’s currently one of the best and vibrant drummers alive. Watching and listening to drummers like him makes me want to play drums even more, and that’s where I get my inspiration. 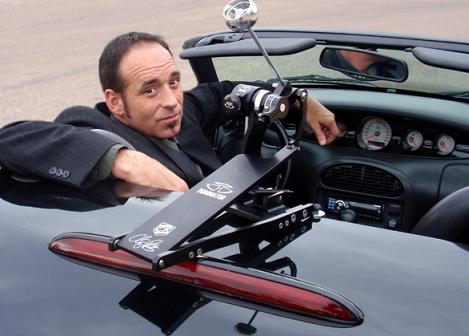 UberProAudio: Describe to us your favorite trick. What makes it the best in your eyes?

Chip: My favorite trick is a no-look, behind-the-back stick flip.

It’s hard to do. But sometimes, when my friends bring someone new into the local club, I’ll look over at them to the left. And while I’m playing, I’ll flip my right-hand-side drum stick from behind my back and catch it in front of me high with the same right hand.

UberProAudio: Talk to us about your many sponsors and endorsements – Trick Drums, Paiste Cymbals, and Trueline Drumsticks, to name a few. How does their equipment enhance your tricks and signature sounds?

Chip: You could say that any self-confidence will enhance your tricks. If you’re on the best gear, you’re gonna have some built-in confidence off the bat. And my Trick drums do that for me every night.

They also blow sound engineers away on a regular basis. Eight years ago my resident drum guru and friend in Tucson, known only as “E,” kept bugging me to come hear his new snare drum. I had just spent $5,000 on a Mapex Orion drum kit and had no intention of trying out another brand or drum set.

But “E” kept telling me about this super snare, which had magical powers of sound and so on. After the fifth phone call, I agreed to meet up and check out a local band whose drummer was playing the snare on loan.  I was at the back of the building in a full house, there was no PA used on the kit, and the Trick snare drum burnt the hair off my eye brows. It cut through the room – it had crazy power and was just amazing.

I ordered my first Trick snare drum the next day and haven’t looked back since.
In my opinion, Trick just makes better drums.  I sold my DW drums a week after purchasing the Mapex, and the Mapex kit was gone a few days after my Tricks came in.
I’m not saying the DW and Mapex were bad – they were great kits and sounded great.
I just really enjoyed the Trick’s response and tone more-so than the wooden kits.

Trick makes the Ferrari of drum sets and pedals. The best of the best. Once you get to that Cadillac-level of drum sets, I think the top three wood company’s all are about the same. They all make fantastic products at that level, and the preference at that point is simply personal taste.

My personal taste for drums since hearing that snare and playing my first kit has been Trick. Period. The drums are designed to resonate and are made of AL13, an aluminum alloy mix that has no glue or plies like the old wooden drums are still made with. Nothing I have ever played compares. I love ‘em.

I then applied to Trick for endorsement about seven times in two years. I bugged them with updates and pictures and “news” they never asked for. Ha!

I’m glad they were so polite to me during that time. I probably would have been sick of it myself after the fourth application. Months after I stopped, an amazing drummer named Dom Moio took Troy Luckutta from Tesla – one of Dom’s students – down to a bar in Phoenix called Char’s, where I was playing. Dom and Troy later told Trick’s President, Mike Dorfman, that I could in fact play. And then out of the blue, Mike sent me an e-mail stating they would be happy to add me to their roster.

So I had my dream kit, and I was to be signed with what I still feel is still the coolest drum company in the world. When Trick’s president e-mailed me, it was one of the best days of my life.  At one point a few years into it, I was the west coast A/R rep for Trick. I later stopped doing that so much so I could focus more time on my own things. But I still get calls from them from time-to-time to chat about who’s playing what.

Sometimes I’ll see a promising drummer and call them to let them know my take. I’m very proud of my relationship with Trick, and I think in years to come they will only continue to help drummers be more effective with their innovations.

Drumsticks – I had my signature model drum stick made by Trueline about six years ago and had found out this year that they are out of business due to various reasons and the economy. Very recently, I had to find a great pair of sticks to use that I could work with. And I found my match with Pro Mark.

The process took me about three weeks of playing with various brands. Some brands make decent sticks, some have bad batches because of the quality of the wood used.  I found my favorite sticks, and I’m both happy and proud to say that as of May this year, I am now an official Pro Mark artist. And we are soon coming out with some www.chipritter.com signature Pro Mark sticks.

When I first heard about Trueline closing, I went out and bought all the top shelf sticks made in the world – Pro Mark, Vic Firth, Vaters. I kept switching back and forth and found myself going back to the Pro Marks every time. I have to add honestly that the fact that Johnny Rabb plays Pro Mark – well, I also really wanted to play Pro Mark.

Again, everyone has a personal preference when it comes to gear and there are great companies out there. These are just my personal choices.

As far as cymbals, my favorite sound has always been Paiste. My whole life, I ended up going back to Paiste after trying the other top cymbals.

I have played other brands, and I had talked to other companies at times. But the quality of the Paiste cymbals and the overall results I got with Paiste on studio and live shows kept me coming back to them.

Being an artist with Paiste is an honor for me because I feel that they really make the best cymbals in the world. Again, preference, but also results from my personal experience –using the product before endorsing it.

That’s about it as far as gear. Trick, Paiste and Pro Mark are what I’m playing, and their sound is what truly keeps me happy with the sound I’m getting. Ultimately, they all help me with my sound. By using these drums, cymbals, and sticks, I just flat-out sound better. And that influences me greatly to do my best every day.