Dan Auerbach is the guitarist and vocalist for the Black Keys, a blues/rock group from Akron, Ohio. He also was in the 3 piece band "The Barnburners".

Dan has a ton of gear in his arsenal and often switches up what he uses. Below you'll find one of the better listings of what he has. Let's see what type of gear and equipment is in the Black Key's guitar player's rig. 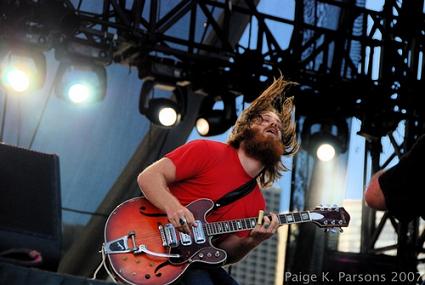 Note: Dan is into a lot of guitars that are no longer made.

- Teisco Del Ray guitars (as seen in the video for 10 a.m. automatic)

Effects
Note: Dan has claimed he has over a 100 pedals.
- Analogman Sunface

- Electro-Harmonix Sovtek Russian Big Muff (his is the green one)

- Fingerpicks on his index finger

Go to the next page for pictures of Dan's Black Keys guitar rig.

Big thanks to Sanjay Mistry for giving us permission to use a couple awesome pictures of the Black Keys guitar rig. Thanks Sanjay! The rig pictures are from March 20, 2008 in London.

Click on an image to enlarge it fullsize in a shadowbox.