Thomas Erak is the lead guitarist and lead vocalist from Mukilteo, Washington based prog-rock/post-hardcore band The Fall of Troy. Thomas is currently endorsed by Gibson USA & Orange Amplification. He used to provide vocals for the now defunct Seattle hardcore band, The Hills Have Eyes. His father played as a session musician with The Eagles, playing the Bass guitar, and touring with his side project. As a guitarist, Erak claims to be influenced by Jimi Hendrix, Jimmy Page and Billy Corgan. As a writer, he claims Kurt Cobain is his biggest influence. He has been playing the drums since he was 2 years old, and has been playing the guitar for seven years.

Let's look at what gear and equipment has been seen in The Fall of Troy's Thomas Erak's Guitar Rig. 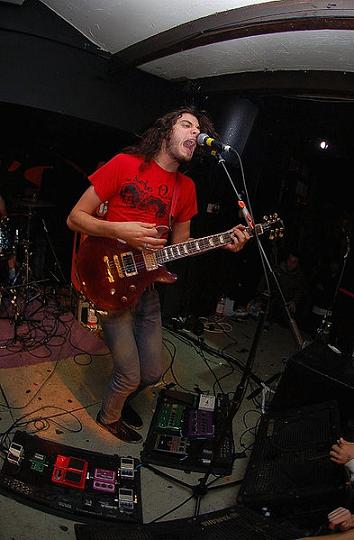 - Gibson Les Paul Standard Double Cut Plus, Rootbeer Finish, with a Seymour Duncan JB humbucker in the bridge (second of this model Erak has used)

- LTD EC-400, See-Thru black cherry (discontinued and last heard to be lost during a European tour)

- Rickenbacker 330, Maple-Glo Finish (Not used live anymore due to its being a gift and danger of being broken)

- Epiphone Flying V, Black(Neck was broken at the end of a show)

- Budda Superdrive 80 head (he's been seen using the Budda's with the Oranges in 2009. Budda site says he is endorsed)