Travis Stever (known to fans as "Trav" or "The Bone") is the lead guitarist for Coheed and Cambria, a progressive rock band from New York.

In addition to being one of the main players in Coheed and Cambria, he is the lead guitarist and vocalist of his side project called Fire Deuce, an 80s style metal band who released "Children of the Deuce" in 2005.

Travis plays a pretty nice guitar rig - not overly complicated but a nice set of music equipment. I'll also mention that if you like Coheed and Cambria and are interested in their gear, we've also profiled Claudio Sanchez guitar gear on UberProAudio.

Let's look at what gear and equipment has been seen in Travis Stever's guitar rig. 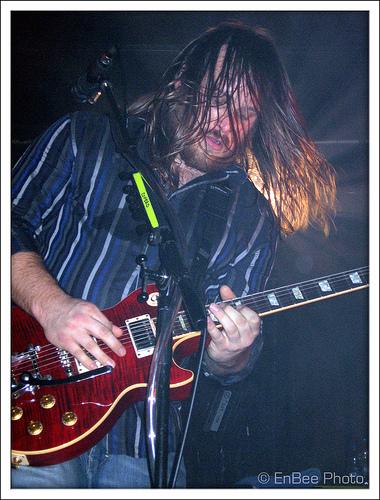 - Boss LS-2 (used to switch between Bogner and Mesa)

One of our readers reported the following gear in Travis' 2010 rig:

Big thanks goes out to DarkRoomDemons.com for giving us permission to post an awesome picture they took of Coheed and Cambria  guitarplayer Travis Stever 's pedalboard!

The pedalboard picture with the EnBee watermark is by EnBee photo and licensed under the Creative Commons Attribution-No Derivative Works 2.0 Generic license.

Click the images to enlarge them to fullsize in a shadowbox.