If you've been wondering what the differences are between Tama's Iron Cobra Power Glide kick drum pedal and the Tama HP200 Iron Cobra JR kick pedal, look no further. ÜberProAudio does a side by side comparison of both drum pedals for your viewing pleasure. 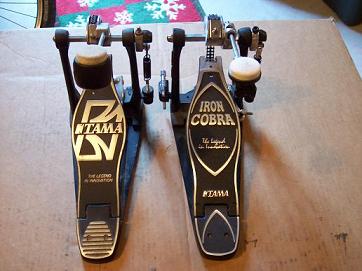 Tama makes many kick drum pedals, but two of interest are the popular Iron Cobra Power Glide Pedal and it's "offspring" the HP200 Iron Cobra Jr. Pedal. Despite the fact that the Power Glide costs more than twice the price of the Iron Cobra Jr Pedal, there are many similarities between the two. At the time of this writing, the Power Glide can be purchased for around $199:

And the Tama Iron Cobra 200 series pedal (which is a newer version of the HP200 reviewed in this article) is about $75:

Go to the next page to see the details on the Iron Cobra drum pedal.

Before we get into our side-by-side comparison of the two kick drum pedals, first let look at the details of the Iron Cobra Power Glide pedal. 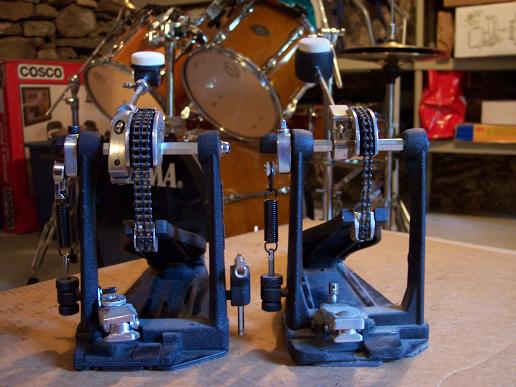 Increased power and speed for dynamic live performances! Every adjustment drummers have ever wanted and many they've never even thought of is incorporated into the radical design of the Iron Cobra Power Glide bass drum pedal.

The Power Glide features a double-chained offset cam that increases power and speed as the beater reaches the end of the stroke for dynamic live performances. It also offers the silence and sensitivity needed for professional studio recording. Includes case.

Speedo ring: Tama eliminated another source of friction by replacing the traditional nylon rocker cam with the Speedo-Ring, a rocker cam with a high quality built-in ball bearing rocker.

Oiles bearing hinge: Iron Cobra footboards feature the same Oiles bearings used in the aerospace industry, not only providing even smoother action and durability than ball bearings, but also increasing Iron Cobra's stability by eliminating the annoying side-to-side motion found in many pedals.

Para-clamp II: Para-Clamp keeps your pedal flat on the floor no matter what your bass drum angle. The Para-Clamp is tightened from the side so you never have to insert your finger under the footboard. And since you can clamp your pedal to hoops up to 14mm (9/16") in thickness, Iron Cobra will fit just about any bass drum in the market.

Pedal Anchor: To keep left-side double pedals from walking, a special stabilizer is mounted to the outside frame. This augments the stability of the floor anchor bolts.

Quick hook: Quick-Hook not only allows rapid spring attachment and reattachment for rapid set up and tear down, it also eliminates wobbling and allows maximum power transmission to the Speedo-Ring. And you never have to worry about it slipping off during performance.

Connecting Rod: A new aluminum twin pedal connecting rod provides lighter weight and smoother action. The connecting bolts are now screwed into a new steel plate instead of directly into the connecting rod for greater durability and much easier and less expensive replacement.

Carrying case: You know what pedals go through night after night. After being stomped on over and over, they get thrown in bags and roadcases where there's more hard rock and roll than the gig itself. That's why Tama Iron Cobras come with a specially designed protective carrying case.

Before we look at some close up comparison pictures I took of the pedals, here's a couple pictures of the hard shell case that came with the Iron Cobra Pedal. According to the Tama site, it looks like the HP200B pedal may come with the same case (my older HP200 didn't have one though). Just to test, I stuck the HP200 in the Iron Cobra case and it fit perfectly. 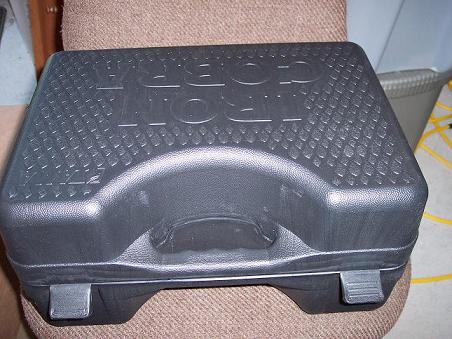 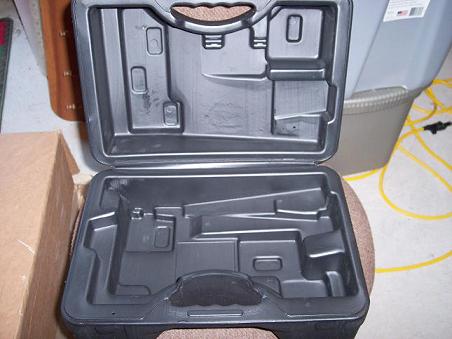 One area of difference between the two kick drum pedals are the beaters. 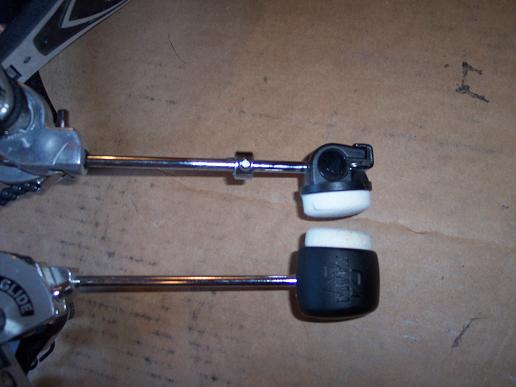 You can see that the Iron Cobra beater is a bit smaller than the Jr pedal and more adjustable. The Iron Cobra beater also comes with a small adjustable weight. I played with this weight in all different positions. Putting the weight at the top gives some extra power to your kick. Putting it at the bottom makes it a beat easier to kick. From there, you can move it anywhere in between or even remove it if you want.

Next, notice that the Iron Cobra has two chains and the Jr only has one, making it a bit less rugged. You can also notice the spot where the beaters insert into the pedal in the pictures. 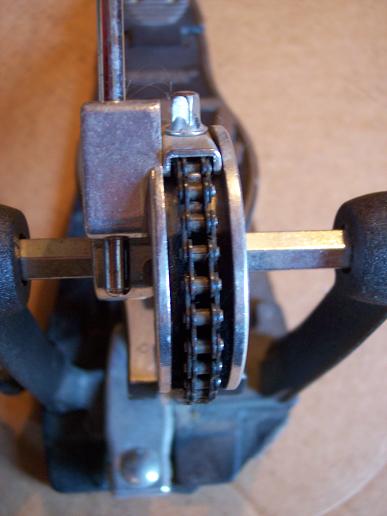 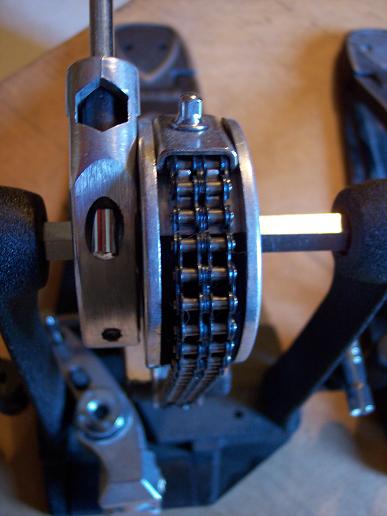 Take a look at the pedals from the front. You will notice that the Iron Cobra looks a bit more rugged and beefy in comparison to the HP200 Jr pedal. 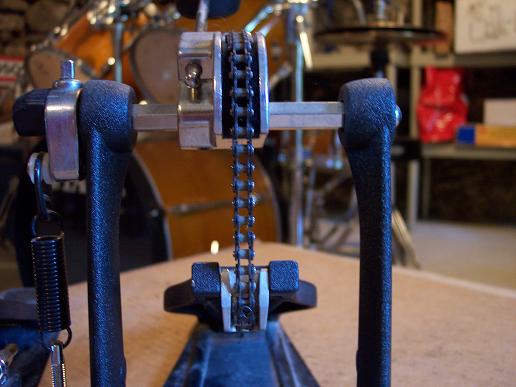 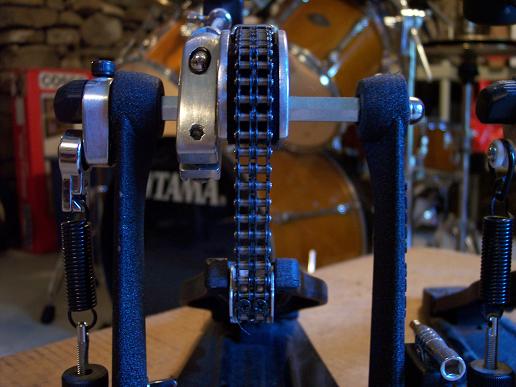 Look at the quick-hook and speedo ring on the Iron Cobra pedal. It is quite a bit smoother than the HP200. 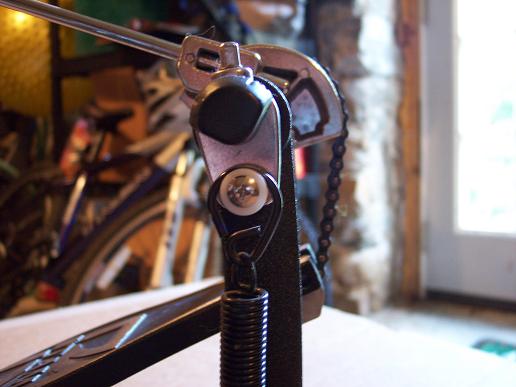 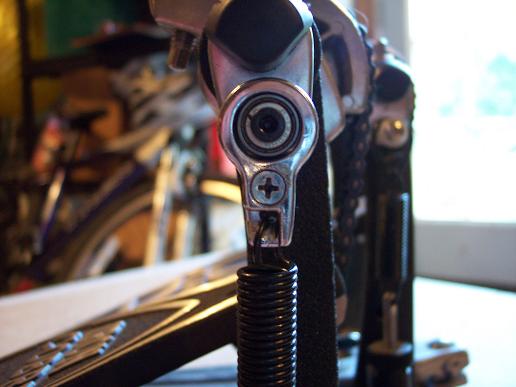 After playing both pedals it is clear that the Iron Cobra "wins' in a versus match, but for the price the Iron Cobra Jr pedal easily holds its own. They both play nice, however the Iron Cobra is quite a bit more robust and has many more adjustable features. Practically everything on the pedal is adjustable, giving you the opportunity to completely customize it the way you like it.

If you are a newer drummer, are low on dough, or just need a great backup pedal, I would definitely recommend that you check out the HP200 Iron Cobra Jr pedal. If you are a more serious drummer, have the cash, or are looking for a main pedal, then splurge and get the Iron Cobra - I think you'll like it.