Edward Van Halen is a guitar player who needs no introduction. He helped create modern electric guitar playing. Eddie was a legend of guitar, blazing a path for many of the world's best guitarist. We did a lot of research here to see what Eddie Van Halen's guitar gear and rig has looked like over the years. Let's look at some of the guitar equipment gear that Eddie had been seen using during his long and storied career with the rock and roll band Van Halen. The guitar gear that follows covers gear from the Van Halen "Brown Sound" days to much later in his career, when he was producing his own guitars, amps, and pedals under the EVH brand. 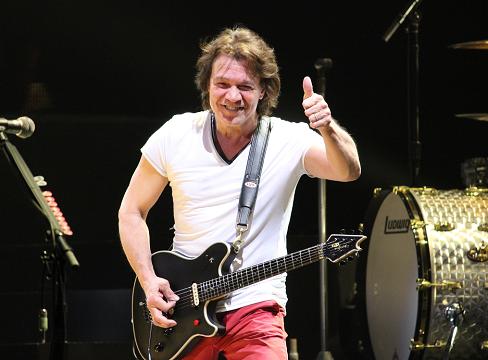 - EVH "Frankie" guitar from the striped series . This guitar is a replica of the famous Frankenstein guitar - perhaps one of the most iconic electric guitars in history.

- EVH Shark striped electric guitar. This is modeled after the original shark guitar that Eddie Van Halen had crafted by "when Eddie took his angular offset axe and sawed a chunk out of the body, leaving jagged edges in the wood that resembled teeth". Van Halen's shark guitar was initially seen live during the first Van Halen World Tour in 1978, but became more widely known and loved by fans after appearing on the back cover of Van Halen's 1980 album, Women and Children First. Interstingly this guitar was supposedly used heavily on the first Van Album record. The original guitar was actually a white colored mid-70's Ibanez Destroyer which was similar styling to a Gibson Explorer. Easily one of the coolest guitars in rock history.

- EVH '79 Bumblebee electric guitar. Brace yourself - the price on this replica guitar is staggering, but it's one of the ultimate guitars to have on your wall if you are a true Van Halen fan. This guitar is an exact replica of Eddie Van Halen's original Bumblebee electric guitar which made its official debut on the cover of the 1979 album Van Halen II. Only 50 of these guitars were made - a true collectors guitar. Here's the details of the guitar over on the EVH site.

- Teisco Del Ray electric guitar (his first guitar, which he bought for $70 when he was a kid) 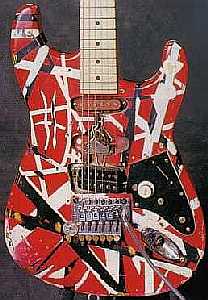 - Marshall 100-watt Super Lead. Van Halen's Marshall amp was a very significant part of his early guitar tone. This amp was used in the studio for our favorite early Van Halen records. Eddie ran this amp cranked. Eddie used an Ohmite Variac with this amp to to manually adjust the line voltage. Premier Guitar did a nice little writeup about the Variac and the Brown Sound.

- Soldano SLO-100. Used between the Marshall and 5150 time. Used on For Unlawful Carnal Knowledge album.

- MXR EVH Phase 90 Phaser. Eddie used a Phase 90 in the 70's, and his signature model recreates that tone and more.

- Shure SM57 microphones, which were used to capture his guitar tone in the studio

- Here's an awesome interview that Guitar Player did with Eddie back in 1978. In this interview, Van Halen really gives a glimpse of the exact gear he was using back in 1978 - we are talking guitars, amps, effects, and more guitar gear of his, live and studio. Ed discusses some of the his and the bands history and some different techniques used in the studio. What's really fascinating is Eddie talking about his Frankenstein guitar - he says that he got the body for $50 and the neck for $80 and used various guitar parts he had. Pretty wild to think how much the replicas cost now!

- Wow, this is a crazy cool article that Eddie Van Halen did with Popular Mechanics. All we have to say, is did you know that Eddie Van Halen holds a patent for a device that is like a bracket that swings down from the back of the guitar, supporting it at a 90-degree angle from your body and letting you play the instrument like a lap guitar?!?! 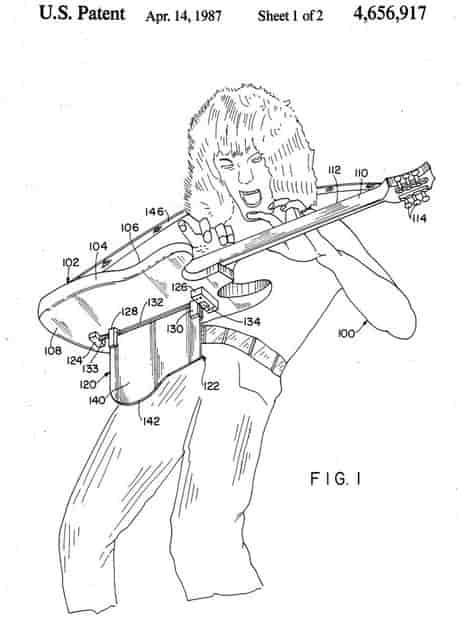 - Eddie once brought his Marshall guitar amp to Michael Soldano to be retubed. When Soldano opened the amp, he observed that Eddie's Marshall amp was not modified at all and appeared stock! Soldano loaned Eddie an SLO-100 amp, which Eddie liked so much he bought. Check this magical video out at minute 7:00 to hear the story straight from Soldano!