Jason Mraz is an American Grammy-nominated singer-songwriter. We know many have been asking what guitar does Jason Mraz use? This should help answer that.

Let's look at some of the gear and equipment that has been seen in Jason Mraz's guitar rig. 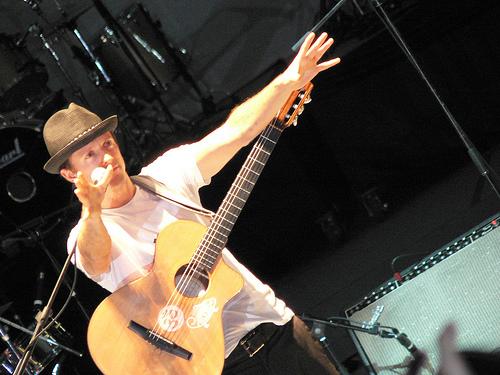 - Moollon 3-Plus pedal (Comprised of the Moollon Compressor, Equalizer, and D.I plus Signal Boost)

- another Moollon pedal in the picture with 3 knobs

Go to the next page for awesome pictures of Jason Mraz's guitar rig.

All images were taken by photographer Fred Morledge in November 2008. The Images are all licensed under the Creative Commons license. We all can thank Fred for the great shots of Jason Mraz's guitar gear, as there was not a ton of info on Jason's gear online until now.