Thurston Moore is an American musician best known as a singer, songwriter and guitarist of Sonic Youth. He's participated in many solo and group collaborations outside of Sonic Youth, as well as running Ecstatic Peace! records.

There is planty of info out there (visit the sonic youth website) on the gear Sonic Youth used in the past, but there isn't too much about more recent gear. Let's focus on Thurston's guitar rig from say 2005 on, and make this THE spot for the newer info.

Let's look at some of the gear and equipment that has been seen in Thurston's post-2005 guitar rig. 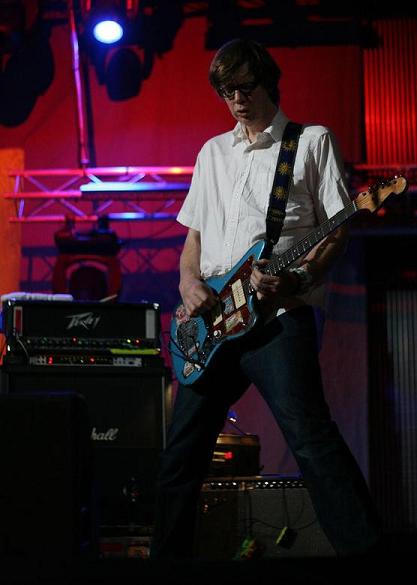 - Other guitars (visit the Sonic Youth site for more info)

- Fender Hot Rod Deville ? (see him with one live)

- Jim Dunlop guitar picks (gray nylons and Green Tortex triangles, at least as seen on his guitar amp in pictures)

Go to the next page for awesome pictures of Thurston Moore's Sonic Youth guitar rig.

Click the Images to enlarge them fullzise in a shadowbox.

- The picture that is a tight shot of the pedalboard with the Mutron on the left is by Geenta. Creative Commons licensed.

- The picture of Thurston's pedals that have half his legs in the shot is by hhjack. Creative Commons licensed.

-  The picture of Moore doing something to his Amp is by iandavid. Creative Commons licensed.