Joshua Homme is an American Rock musician and multi-instrumentalist. He was a founding member of the desert rock band Kyuss, and also as the founding and only continuous member of the hard rock band Queens of the Stone Age ( QOTSA ), in which he sings and plays guitar and sometimes bass. Homme co-founded and occasionally performs with Eagles of Death Metal as its drummer, and continues to produce and release a musical improv series with other musicians, mostly from the Palm Desert Scene, known as The Desert Sessions. Josh also plays in the super group Them Crooked Vultures with Dave Grohl and other musical greats.

Let's look at some of the gear and equipment that has been seen in Queens of the Stone Age Josh Homme Guitar Rig. 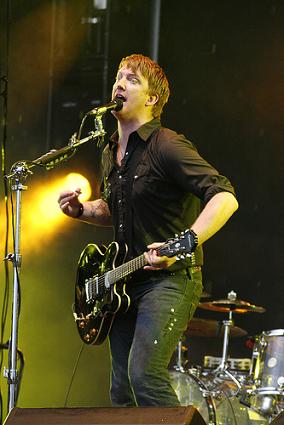 Josh has been seen using these amps and cabs with Them Crooked Vultures:

- Dunlop Crybaby Q-Zone (from our research, this pedal is basically like a stationary crybaby pedal, so you can set it on one frequency and turn it on or off)

Go to the next page for pictures of Josh Homme's Rig

Thanks to a supercool flickr user named kavita41 for giving us permission to display pedalboard photos that were taken at a Queens of The Stone Ages gig. Thanks Kavita! Check out the pedalboard pic below!

Click the image to enlarge fullsize in a shadowbox.