Claudio Sanchez is the lead singer and guitarist for Coheed and Cambria, an awesome rock band, one of my favorites. He is noted for his high vocal range, often extending into an alto register in the manner of Geddy Lee, the unique enunciation of his vocals, and for his long hair with tightly-wound curls. While primarily playing rhythm during his vocals, Sanchez also plays lead, often alternating with guitarist Travis Stever in a "competitive, yet respectful guitar solo" fashion.

Let's look at what gear and equipment has been seen in Claudio Sanchez Guitar Rig. 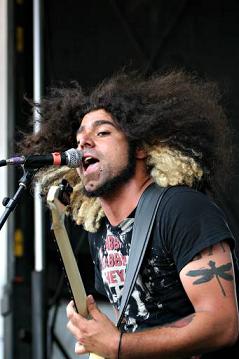 - Gibson '76 Explorer Reissue in Classic White with EMG-81/85 pick-ups, a Graph-Tech nut and Black Schaller tuners (With a Puerto Rican flag sticker behind the tailpiece)

- Gibson '82 Explorer E2 in Natural Walnut/Maple 5 Piece Contoured Body/Neck with EMG-81/85 pick-ups, a Graph-Tech nut, and Gold Schallers with Black tuners and was made the same day his brother was born

Below is a pic of the medusa as requested by user Bob: 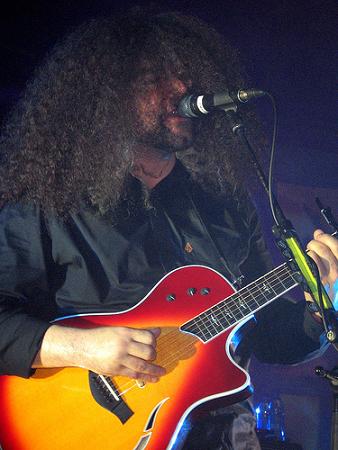 Note: As of late (2013), Claudio has been using the AXE-FX and ground control with much less pedals than he used in the past.

In 2010 some new pedals were noticed in Claudio's rig:

Go to the next page to see pics of Claudio's gear.