Joe Satriani is one of the guitar gods. We thought it was only right for us to do some research into what guitar gear rig Satriani uses (and has used). We gathered some good pictures from the internet of his guitars, amps, and effects. Enough talk, let's take a look at what guitar gear and equipment has been seen in Joe Satriani's Guitar Rig! 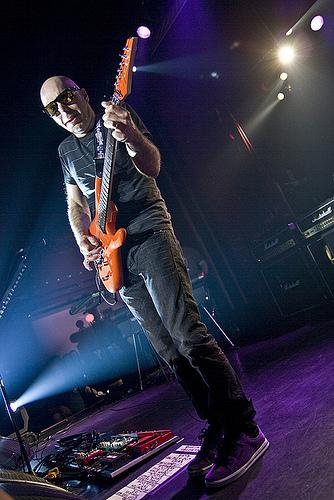 Notes: Satch was using Marshall amps until he got his own custom line of Peavey amps. Now in June 2009, it was announced Joe would be back with Marshall for the Chickenfoot tour.

- Voodoo Lab Pedal Power (uses both AC and 2plus)

Notes:There is an interview on modernguitars.com in which Joe mentioned some of the gear he uses in the studio.

Go to the next page for awesome pictures of Joe Satriani's guitar rig!