From day one Slash has been one of our favorite guitar players. From Slash's days in Guns N' Roses all the way to Velvet Revolver, he has played kick ass guitar riffs on the hottest Gibson Les Pauls, making the guys jealous and the ladies go crazy. Seeing how Slash has often been regarded one of the best guitar players of all time, we think it's necessary for us to look at what Slash's Guitar Gear and Equipment looks like. Let's look at what gear and equipment has been seen in Slash's guitar rig. 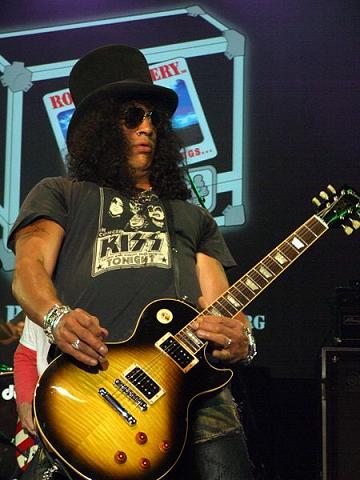 Slash owns more than 250 different guitars. Some of them are the following:

- Gibson 1959 Les Paul replica built by Kris Derrig (some people think that it's a Max Baranet Les Paul replica, but it's not) The recording Holy Grail used on all CD's.

Guitars used by Slash in studio for the recording of Libertad :