James Hetfield does more than just provide the band Metallica with growling vocals - he is also the bands rythym guitarist. Let's checkout his gear.

Let's see what guitar gear and equipment Metallica's James Hetfield's has been seen using in his guitar rig. 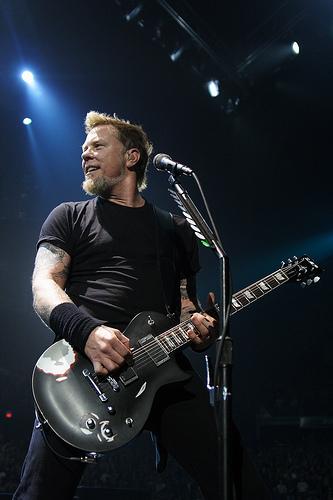 James has uses a large amount of guitars. The following are some of them that have been seen:

- ESP Explorers, including a black and chrome version.

- Line 6 Variax Acoustic (Used for live performances of "The Unforgiven")

His amp rack has a Mesa/Boogie Triaxis and a Strategy 400. He also plays two Diezel VH4 heads loaded with EL34s. a Wizard, a Marshall DSL, a Roland JC-120, and a Sears Magnatone amongst other amps.