Most guitar players growing up wanted to have a guitar as sick as one of Metallica's Kirk Hammett. Let's take a peek at what Kirk has been seen using for a guitar gear rig and equipment. Kirk Hammett has played a lot of different gear over the years with Metallica, so we will try to give a nice survey of what he uses. 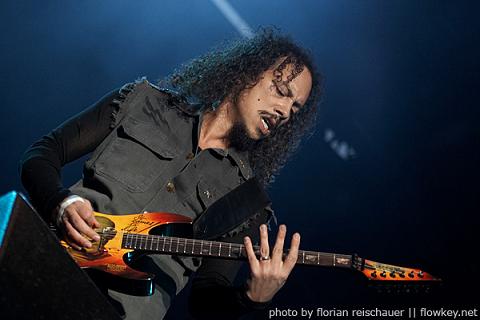 - Hammett also has an ESP KH-3 hardtail that he calls the "Invisible Kid", which Kirk did the artwork for himself.

- He has an ESP M-2 "Frankenstein" that is inlated with "The Monster is Loose". The eyes are LEDs.

Some of the other guitars Kirk owns are:

- Audio Technica microphones: AT4050 for guitars, AT4054 for vocals

Kirk also has been known to use Line 6 pedals, Dunlop CryBaby wah, and a Digitech Whammy. Let's look at what he's used: