Tommy Thayer is an American musician and the current lead guitarist of the rock group Kiss. Tommy also has played with other bands such as Black N' Blue. 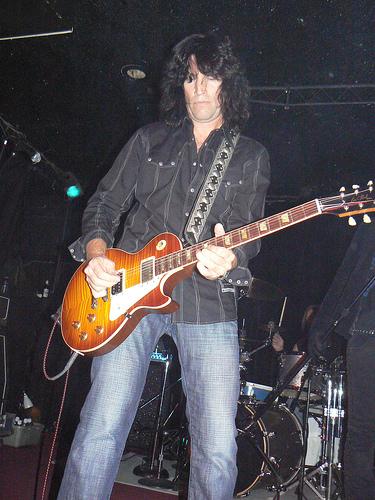 - Tommy has stated in a Q&A on his site he has never been a big effects pedal user, however in more recent years rig interviews have showed a variety of pedals being used in his rig. He's said that about 95% of the songs he plays live are straight guitar into the amp, and 5% are with some guitar effect in use.

- Two white Boss pedals, with tape over them - one says "short" and the other "long" which leads us to believe they are Boss Delay guitar pedals.

Here's a really fun guitar gear walk through that Hughes and Kettner did with Tommy Thayer's guitar tech. Tommy Thatyer's guitar tech Mark, shows off the amplifiers, effects pedals and more from Tommy's guitar rig. Mark talks about controlling the pedals of Tommy's rig for Tommy since it would be hard for Tommy to control the guitar effects pedals with his large stage boots on. You'll notice multiple Boss pedals in the rack - we believe we have identified them above.

Here's another rig walkthrough video where Tommy Thayer tells you about the gear he was using in his 2019 guitar rig. This video is cool because around 11:30 in the video, Tommy shows off his guitar rack. He said "I don't use too much so don't let all this throw you". He then showed his wireless transmitters, which are made by Shure - he uses four channels of them. He shows off a Boss delay and a Boss flanger pedal and says he uses the effects in two songs. He also has a Boss octave guitar pedal that you can catch a glimpse of there next to the other boss guitar effects pedals.