Les Claypool from Primus is arguably one of the better bass players on the scene. He has used a variety of gear - let's take a look and see what bass gear he has been seen using in the recording studio and live. 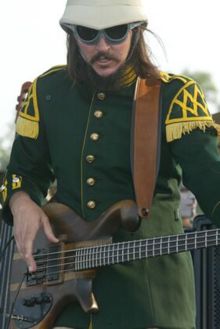 Let's first look at some of the gear Les has used in the recording studio.

On 4 of the tracks he added delay using a Line 6 DL4 Delay Modeler:

Distortion was also created using vintage Electro_Harmonix and Korg pedals. All bass tracks were recorded direct to the console in his home studio.

- ‘Whamola,’ (weird washtub bass-type instrument with a single D string on a stick, a pickup, a peg on the bottom like an upright bass, and a big handle that you pull to change pitch. Played with a drumstick)

When he tours, Claypool has been seen using