Todd Rundgren is an American musician, singer-songwriter and record producer. Todd has been in many great bands over the years, including Woody's Truck Stop, Nazz, and Utopia.

Todd is a favorite at UberProAudio. You definitely should check him out if you haven't had the chance to hear him yet.

Let's take a look at the gear and equipment that Todd has been seen using in his 2009 guitar rig. 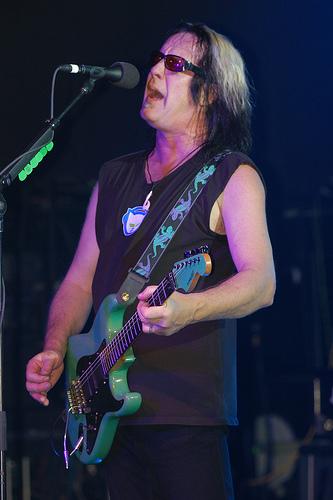 - Veleno Ankh guitar (he had two custom made Veleno guitars. They were super cool guitars. They were guitars that were made out of solid aluminum, which caused them to weigh a lot. Looked similar to Prince's cloud guitar, though these guitars came first. The guitars were destroyed in a warehouse fire.)

- Fender Telecaster - vintage, butterscotch color, from the 60's (got at vintage guitar shop in San Francisco. Had some electronic work done to the insides of the guitar)

Here's a fantastic interview that PG did with Todd Rundgren. Todd talks all things guitar gear - it's a must see if you are a Todd fan. He talks about his Foamy (foam green) electric guitar that was made by Fernandes.