Taylor Swift is an american country-pop singer-songwriter. Common questions we get from pop and country fans are things like What guitars does Taylor Swift play? What acoustics and what electric guitars has she used? What type of strings and picks does Taylor Swift use? In this article, we will answer those questions for our guitar gear loving readers. 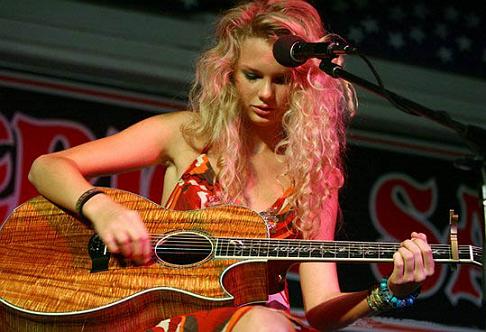 - Taylor SB1-X SolidBody Classic guitar, black color. She played this on her song "Should've Said No" during the Fearless Tour.

- Taylor 718e acoustic guitar. Used live on the song "Everything Has Changed", when she was on the Red Tour with Ed Sheeran. Also played on Britain's Got Talent show. It seems Taylor only built this guitar model for a limited period of time.

Taylor Swift has played a Fender Johnny Marr Jaguar Electric Guitar which is white colored with a rosewood fingerboard. In the following video, you can see her perform live with her Fender Jaguar at a GRAMMY Museum performance show. This guitar is pretty awesome - it has Bare Knuckle pickups in it which sound amazing.

At that GRAMMY Museum show, she also appears to play a Gibson Songwriter Acoustic-Electric Guitar too.

Here's a fun interview where Taylor Swift talks with Bob Taylor about the Taylor guitars that he makes which she has many of.

Hopefully this helps answer what guitars, strings, and picks that Taylor Swift has been seen using. If you see Taylor playing any new or different guitar gear, make sure to post a comment and help us keep this article updated for all the Taylor Swift fans!