Wes Borland is a musician, best known as the former guitarist in the band Limp Bizkit. He has been in many bands though, including The Damning Well, Goatslayer, Big Dumb Face, From First to Last (on bass), and more recently in Black Light Burns, in which he writes most of the music and sings, and additionally is also the touring guitarist for Marilyn Manson.

Let's take a look at the gear and equipment that Wes has been seen using in his guitar rig. We'll try to list not only new stuff, but past gear too. 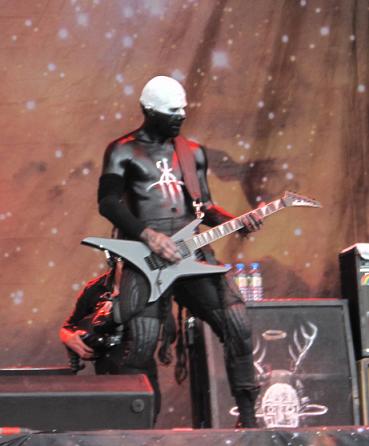 Note: We are sure there are gaps (things to add/delete/modify) in Borland's gear list, so help fill in info if you know anything.

- Jackson Warrior WR-1 guitars (gray one and white one. Also has a Japanese model)

- Ibanez RG7CST (as seen in a youtube demo video of Wes)

Fact: When Borland played 7-string in Limp Bizkit, he had two high E strings instead of a B.