Bootsy Collins is a funk bassist, singer, and songwriter. Bootsy played with James Brown in the late 1960s (starting when he was 17), and with Parliament-Funkadelic in the '70s, Collins' driving bass guitar and humorous vocals established him as one of the leading names in funk.

Let's look at some of the gear and equipment that has been seen in Bootsy Collins bass rig. 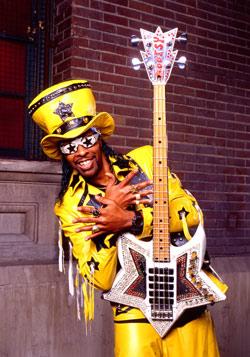