Michael Angelo Batio is an American virtuoso guitarist and columnist from Chicago, Illinois. Guitar One Magazine voted Batio the fastest guitar player of all time. MAB was also mentioned and listed recently in Guitar World Magazine in an article where he was listed as one of top 50 fastest guitarists in the world.

Lets look at some of the gear and equipment that has been seen in Batio's guitar rig. 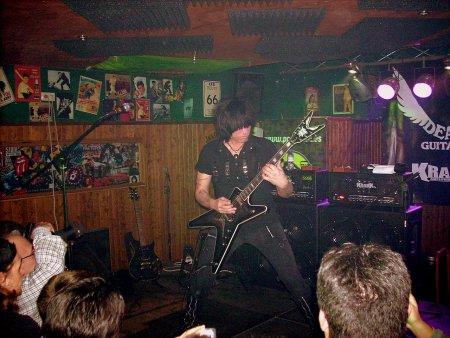 Click the gear for more info and specs at Muscian's Friend

- Batio created both double and quad guitars. Currently, Dean makes models of each for him.

- Custom made USA 29 fret guitar built by Wayne Charvel. The top is made from Military aircraft aluminum. It was designed by MAB and called The “Rocket” Guitar.

- Dean 7 string guitar. This is one of MAB’s “practice” guitars.

- Krank amps? There is a picture of him playing Kranks, but not much info out there about this.

In the studio, he also uses:
- Rocktron Chameleon pre-amp