Chris Cheney is the guitarist and lead vocalist in the Australian rock band, The Living End. A talented guitarist, his trademark Guitar is a Gretsch White Falcon and he uses mainly distortion and modulation effects.

Let's look at some of the gear and equipment that has been seen in The Living End guitar player Chris Cheney's guitar rig. As always, if you have info to add/remove from here, leave a comment. 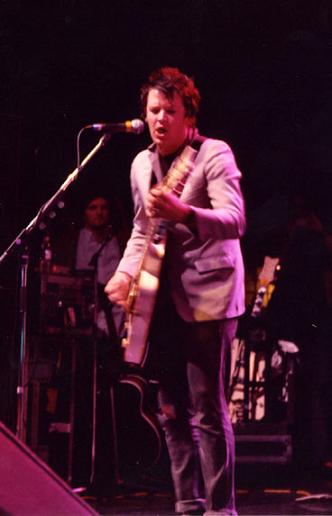 - Gretsch Tennessean (Used on the recording of Hellbound)

- Fender Guitars are currently producing a Chris Cheney Signature Series Gretsch Guitar (6126CC). Cheney has been working closely with Fender to refine the guitar. In the video for the song "Rising Sun" Chris uses a prototype of the 6126CC. Changes are currently being made before Cheney gives the go-ahead on the project, most notably the removal of the zero-fret. The prototype was not used in the recording of the song despite featuring in the video clip.