Neal Schon is a guitar player that does not need much of an intro. In case you don't know who he is though, he is the guitar player for the rock band Journey.

Neal Schon has been playing for quite a while so naturally there is a lot of rig info out there. We found a more recent picture of his rig and he uses 5 amp heads and at least 3 Marshall power amps. This guys rig is nuts!!

Neal Schon was also selling a lot of his rig at Bananas at Large, so we got to see some of the exact stuff he owns/owned.

Let's look at some of the gear and equipment that has been seen in Journey's Neal Schon's guitar rig. 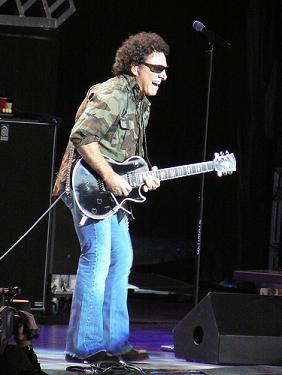 - Fernandes' SUSTAINER on most of his Gibson and PRS