Jonny Greenwood is a BAFTA-nominated musician, best known as a member of English band Radiohead . Greenwood is a multi-instrumentalist and also serves as Radiohead's lead guitarist. He is the younger brother of fellow Radiohead member Colin Greenwood. In addition to guitar he plays viola, organ, piano, xylophone, glockenspiel, ondes Martenot, banjo and harmonica. He was ranked number 59 on Rolling Stone's "100 Greatest Guitarists of All Time".

Let's look at some of the gear and equipment that has been seen in Jonny Greenwood's Guitar Rig. 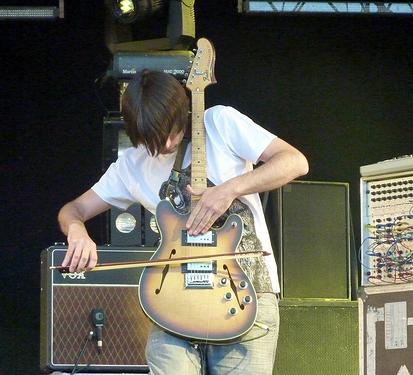 Electric Guitars
- Fender Telecaster Plus, with a custom cut-off switch and special rewirings made by Greenwood and Plank (Radiohead's Guitar Technician). This guitar is equipped with Lace Sensor pickups.

- Fender Starcaster, with Fender Wide Range pickups, can be heard predominantly on Kid A and Amnesiac.

Amplifiers
- Vox AC30, used for clean tones. (all his effects go through this except his ShredMaster)

- Marshall ShredMaster (which is unmodified, contrary to popular belief)

- Demeter "The Tremulator", older version of the Demeter TRM-1 Tremulator (which was originally thought to be a homemade tremolo pedal)

- BOSS FV-300H Volume Pedal, used as a gain controller. (placed before his ShredMaster)

- BOSS LS-2 Line Selector (used to switch channels) (two are placed on pedalboards, one placed off)

- Akai Headrush E1, now an E2 is used(used as a loop recorder)