Buckethead (aka Brian Carroll) is an American guitarist and composer. He is known for wearing a white plastic mask and a KFC bucket on his head and for being a quiet dude.

Buckethead has released 38 solo albums and performed on over 50 more records. He has also made a guest appearance on 44 different albums from various artists. His music spans across diverse areas such as thrash metal, funk, electronica, jazz and avant-garde music.

Cool fact we found - Buckethead studied for a year under Paul Gilbert.

Let's check out the gear that has been seen in Buckethead's Guitar Gear Rig and Equipment ! 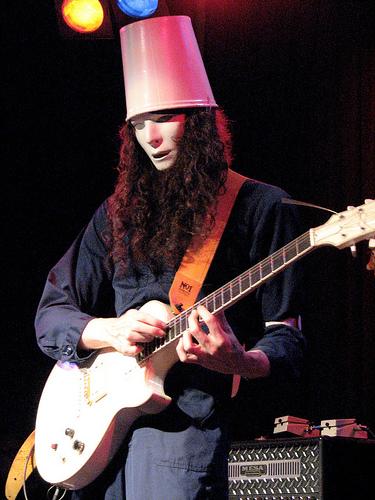 - Gibson Les Pauls - custom made, white, all white hardware, killswitch, DiMarzio X2N pickups. (Gibson made a signature version for him also in 2010)

- Jackson Y2KV - "coopwood" custom made, reverse neck, with larger body and headstock due to Buckethead saying normal guitars looked like toys in his hands

- ESP MV custom - used throughout his concert in the Wetlands, broken as seen in one of the Binge Clips

The following gear was seen on the 2009 tour:

This is other gear that has been seen in Buckethead's rig. Some of it may or may not have been used in recent rigs:

Big thanks to Graeme Flegenheimer for giving us permission to use his 2009 photo of Buckethead's pedalboard. Graeme took this picture May 2009 in South Burlington Vermont.