Michael Todd or Mic Todd (pronounced as "Mike") was the bassist for progressive rock band Coheed and Cambria. Todd left the band in August 2006 because of personal issues, but officially rejoined the group on April 25, 2007. He later left the band again.

If you know Coheed, you know that Mic gets a great bass sound. His bass rig is pretty minimal based on the research we did. If you have anything to add, please do.

Let's look at some of the gear and equipment that has been seen in Coheed and Cambria's Michael Todd's Bass Gear Rig. 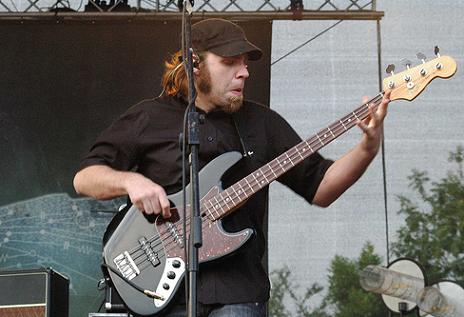 - Spector Rebop4: fretted four-string bass guitar, orange in color. Called "Amber" by Spector.
It is of the bolt-on construction, with two passive EMG-HZ bass humbuckers and a Spector "Tone Pump" active preamp and EQ. It was made in the Czech Republic and has black hardware with a phenolic nut (a black nut).

Note: Bass Player mag also stated he has a Spector Rebop 5 used on In keeping secrets of silent earth 3

- Spector EuroLX 4: A fretted four-string bass guitar with a natural maple oil finish.
It is of the neck-thru construction, with two EMG pickups, one P style and one J style pickup (the P at the neck position and the J at the bridge position). It has the same Tone Pump circuitry as the ReBop. Its hardware is finished in gold and has a brass nut.

- Spector Q4: A fretless four-string bass guitar in a black stain finish. It is the same bolt-on construction as the Rebop, and has the same pickups, hardware, nut, and electronics.

- Fender Highway 1 Precision Bass in red with white pick guard, and one in black

- Morley Volume pedal (appears to be the Volume Plus)

- unidentified pedal - appears to be a Fulltone Bass-Drive Mosfet