Mike Einziger is the multi-instrumentalist, co-writer and guitarist of the alternative rock band Incubus, in addition to his own side project band, Time Lapse Consortium. Instruments that he has played on Incubus records include guitar, piano, Mellotron, pipa, analog synthesizers, tape samplers, Fender Rhodes, Wurlitzer, and more. He's also played a Jerry Jones Guitars Master Sitar on "Nowhere Fast" from the Make Yourself album (live, he just plays the sitar part with his guitar), and a Pipa on "Aqueous Transmission". Mike also plays electric piano on songs like "Here In My Room" and has played piano on live versions of "Drive."

Let's look at some of the gear and equipment that has been seen in the Incubus guitar player's Guitar Rig. 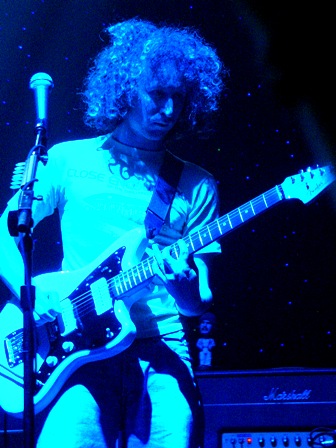 - Ibanez guitars (in the early days)

Notes: The Jazzmaster is now his main guitar. It has Seymour Duncan JM-2 pickups

Note: eliminated the tube rectifier on the AC30 and re-wired the tube socket to accommodate a solid-state rectifier

Note: The amp has been modded. The preamp stage was reconfigured to extract additional gain and a master volume knob was installed. The knob is situated where the second speaker jack normally goes into the rear of the amplifier.

- Voodoo Lab Pedal Power (multiple of these on his board)