Jimmy Page is an English guitarist, composer and record producer. Jimmy Page began his career as a studio session guitarist in London and was later a member of The Yardbirds, from late 1966 to 1968, before founding the English rock band Led Zeppelin. Page has been described as "unquestionably one of the all-time most influential, important, and versatile guitarists and songwriters in rock history." In 2003, Rolling Stone magazine ranked Page #9 in its list of the 100 Greatest Guitarists of All Time. He has been inducted into the Rock and Roll Hall of Fame twice, as a member of The Yardbirds and also as a member of Led Zeppelin.

Jimmy has had a long career and played on a ton of gear. Let's look at what gear and equipment has been seen in Led Zepplin's Jimmy Page's Guitar Rig. 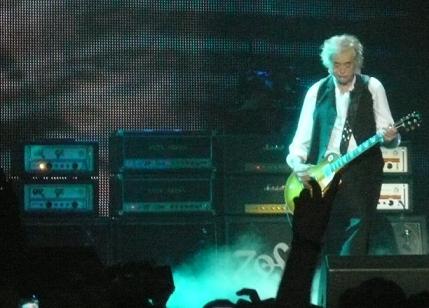 Due to the fact the guitar was too heavy for him, one of Jimmy Page's Les Paul Custom "Black Beauty" is now owned by Dan Hawkins of The Darkness (you can find Dan's rig profile on UberProAudio also). It is not the same Black Beauty that was stolen from him in 1970.

Electric guitars
- 1959 Fender Telecaster (given to Page by Jeff Beck and repainted with a psychedelic Dragon on it by Page. Played with the Yardbirds, on Led Zeppelin I, the early tours (68-69), and on the studio version of Stairway to Heaven.

- 1964 Lake Placid Blue Fender Stratocaster(Used during recording sessions for In Through The Out Door and 1979 at Knebworth, especially for In The Evening)

- Another Gibson doubleneck guitar was given to him after he agreed to allow the company to reproduce his original EDS-1275. The guitar was picked by Page out of numerous others after he struck one chord. Page declared "This is it, this is the one!" The guitar was marked (beforehand) #1.

- 2007 Gibson Black Beauty custom (remake of his original stolen in 1970, has modifications concerning pickup configurations which include a 6-way pickup selector, and coil-tap on the bridge pickup)

- Orange: 100 watt amp and cabinets (Jimmy Page began using the AD30 Single Channel in 1999 while on tour with the Black Crowes)