Dave Murray is an English guitarist and songwriter best known as one of the original members of the heavy metal band Iron Maiden. Dave Murray joined Iron Maiden just two months after it started in 1975.

Throughout his career, Dave Murray has used and endorsed Marshall amplifiers and has used Fender Stratocasters almost exclusively.

Let's look at what gear and equipment has been seen in Iron Maiden's Dave Murray's Guitar Rig. We have tried to include the gear that has graced his more recent rigs. 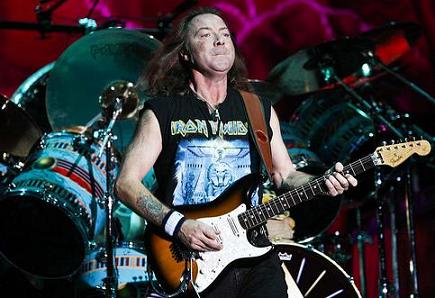 - 3 Fender Custom Shop Stratocasters with Floyd Rose tremolo systems. He also has his prized 57' black strat at his home in a glass case (red 57 pic below)

- Dave has been seen with the occasional Dean, Gibson, ESP, or acoustic (but most of the time he is with his strats)