Stephen has done a ton of interviews about his guitar gear over the years. In this article, we'll show you lots of videos, pictures, and information that will paint a picture of all the different guitars, amps, cabinets, pedals, effects, string gauge, picks, and other guitar gear that Stephen has used in his guitar rig.

Let's look at what guitar gear and equipment has been seen in Stephen Carpenter's Guitar Rig. In this article, we'll shake thing up and go in reverse chronological order and look at some of the more recent guitar gear that Stephen has been using. We'll work our way backwards through guitar interviews Stephen did and will see how his guitar rig gear has changed over the years. 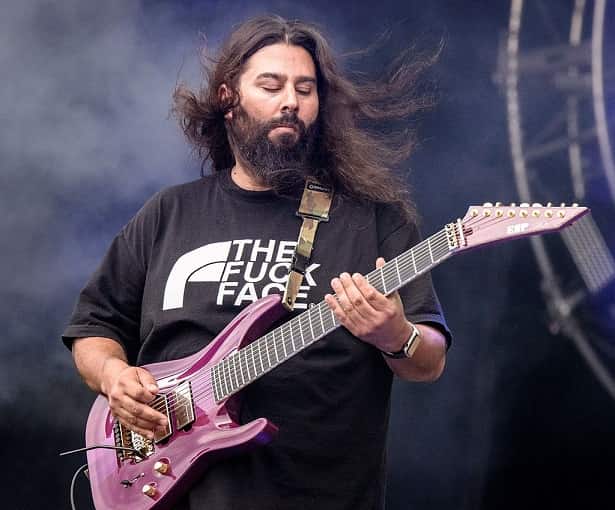 In tribute to Eddie Van Halen, Stephen who is a big Van Halen fan, shows off a video of his guitar rig, in October 2020. On his pedalboard he shows off his MXR EVH Flanger guitar pedal. Other interesting pedals we see are two of the TC Electronic DITTO X2 pedals, a Strymon Big Sky Reverb pedal, Strymon TimeLine Multidimensional Delay Pedal, Pigtronix Gatekeeper Micro Noise Gate Pedal, and more!

In September 2020, it looks like Stephen was playing around with a bunch of Synergy Guitar Preamp Modules as he shows below. It looks like there’s a Soldano SLO, a Friedman HBE, and a Fryette Ultra Lead there in his gear collection.

In August 2020, Stephen posted a picture of his new purple ESP 9 string guitar with Fishman pickups. Stephen can be seen playing the guitar in the “Ohms” video.

Stephen also showed off his pink ESP 8 string guitar in 2020 on his Instagram too.

TC Electronic did a short but fun video in 2019 with Stephen Carpenter, in which he is playing his pink ESP 8 string guitar and talking about signature effects presets for the TC2290-DT, which is TC Electronic’s Dynamic Delay. They show some presets, including “Pink Maggit” and “Double Vision” 2290 Signature Presets in the video. Stef talks about using these presets with the delay unit.

In 2018, Red Bull Music did a short but sweet video with Stephen Carpenter, where he showed off some of the guitars in his collection. Interview is mixed with some live guitar scenes. In the video we see a rack full of ESP electric guitars. Stef said “all of them [guitars] are my favorite, as you can see not one of them sucks...there’s simply a difference between colors and models”. He shows off the custom ESP tele guitar, a highlighter yellow guitar he dubs “chiquita”, and multiple others. They are all seven string except for some 8 string guitar models he shows off.

There’s a great MusicRadar guitar rig tour with the Deftones that was done in 2016. Complete with lots of pictures of guitar gear and lots of quotes. His ESP STEF B-8 model, which is pink with gold hardware, is drop-tuned to E. The ESP STEF-T7B guitar he was using was from 2016. His ESP STEF B-7 has the Louis Vuitton design pattern on it. Stephen has an ENGL power amp in his rig, which replaced the Orange Jim Root heads that he was using in his guitar rig. On the tour, he was using his Fractal Axe-Fx II units aoing with a Furman PL-Pro DMC power rack unit. His cabinets on stage were the Orange cabs in black color tolex, with Celestion Vintage 30 speakers in them. It looks like he has two 4x12 cabs and two 2x12 cabs. On Stephen Carpenter’s 2016 pedalboard, there’s a TC Electronic DITTO Looper effects pedal, Eventide H9 Harmonizer pedal, Fulltone True-Path ABY-St pedal, Voodoo Lab Pedal Power Digital box, and a TC Electronic Polytune 2 guitar tuner pedal.  A Radial JDX 48 unit is used with the Axe-Fx. There are also pictures and quotes of Chino’s pedalboard and guitar gear.

In a 2016 interview from NAMM show, Stef talked about using Orange guitar amps. At first he said he had started using Orange guitar cabinets, along with the guys in Deftones. He then was using some of the Orange amps. It sounded like he had a ton of Orange amp models he had. He lists the Orange Dual Dark, The Orange Micro Darks (“Those things are amazing”), and Orange Jim Root Tiny Terrors. He used the Dual Dark on the album during this time frame. Stephen talks about how he spent a lot of effort over a few years working on his guitar gear tone settings. For a period of time he spent a lot of time playing with his Axe FX rig as the settings and tone he was using needed a lot of tweaks. They discuss the Fishman pickup switch from EMG. Carpenter talks about how he likes change, and likes trying to figure out guitar gear and make the gear work for him.

There was a video of Stephen Carpenter in 2015 where he talks about his gear and Positive Grid BIAS FX modeling plug-in. Stephen plays some guitar on his tele-shaped ESP in the video, using the BIAS effects.

Dunlop interviewed the Deftone’s Stephen and Chino in 2013. In this video, the guys talk about guitar strings and guitar tunings that they used on the bands records. Stephen talked about drop tuning his guitars, both seven and eight string guitars. Stephen said that he was using a string gauge (80) that was a bit too thick on his 8-string guitar – the thickness of the string didn’t have the attack that he wanted. He normally was at gauge 69 on the top string on the 8-string guitar, but for the drop tuning on the 8-string he was trying that thicker string gauge because the 69 gauge string was too floppy. Stephen worked with Dunlop to create a custom string to help solve this problem. In the video there’s a quick shot of a pack of Dunlop Strings that have a custom sticker that says “Dunlop Built for Steph Carpenter” with the following string gauges listed: 11, 14, 18, 28, 38, 49, 59, 69. There’s some video of Stef at Dunlop working with string designer Les O’Connor, to create his custom guitar strings together.

The guys at Premier Guitar always do a great job doing guitar rig rundowns. In this 2013 video, you’ll see all the different guitar gear that Stephen was using on tour. In the opening shot, you can see that nearly all of Carpenter’s guitars appear to have DiMarzio camo patterned guitar straps that are cliplock [one of the straps is purple DiMarzio strap]. Later in the video, Stef says the DiMarzio straps had never failed him over years of use.

Stephen goes on to show off his pedalboard. He was planning to put new pedals on the board and new cabling. It appears he has multiple Ernie Ball VP Jr volume pedals surrounding his Fractal Audio MFC-101 MIDI foot controller board, which controls a Fractal Audio Axe-Fx II. He uses a variety of effects patches on the Fractal. Stef says that he was planning to start putting Dunlop guitar pedals in his rig. Stef said he was going to create a rig for home-use that combines his Fractal guitar rig with his analog pedal guitar rig.

We can see that he has two of the Fractal units in his guitar rack. On top of the guitar rack there’s a couple Electro-Harmonix 22 Caliber Power Amp pedals that power his monitor speakers. Unlike his rig that he showed off in a 2010 Stephen Carpenter Rig Rundown video, that had a lot of pedals and Marshall EL34 100/100 Power Amps, in this guitar rig, his sound is basically going right out of the Fractal to the PA system. Stephen shows off some of his ESP guitar and discusses tone differences between his guitars. Stef mentions that Vivian Campbell inspired him to use two pickups in his guitars.

In a 2010 PG guitar rig tour with Stephen Carpenter, we see a lot of Stephen Carpenter’s analog guitar gear. The tour starts out with Marshall 4x12” 1960 straight cabinet (we've heard that he used 80 watt and 75 watt speakers in the various Marshall cabs), followed by Native Instruments Guitar Rig 3 running on a laptop, Rocktron Intelliflex, Marshall JMP-1, and Marshall EL34 100/100 Power Amp. There’s a large Furman Power Conditioner at the bottom of his rack.

Stef then shows off a custom build pedal board, which was built by Bob Bradshaw. On Steph’s pedalboards, you can see a variety of cool effects pedals, including:

- Custom Audio Electronics MIDI foot controller (controls all his effects pedals, which are on their own effects loops)

In a 2017 Guitar World interview, Stephen Carpenter talked about the guitar gear that he used on “Around the Fur”. He was using his signature ESP guitar that was loaded with Seymour Duncan JB guitar pickups. He used his ADA MP-1 preamp along with a Marshall 9200 Dual MonoBlock Power Amp. Stephen notes that he had uses Marshall JCM800 guitar amp heads prior. The Rocktron Intellifex, Boss Octave effects pedal, Boss reverb pedal, and Hyper Fuzz FZ-2 pedal. Pretty simply compared to his rig in the years following!

Note: Marshalls are the first guitar amps that Stephen used, and he used them for quite some time.

Here's additional guitar gear that isn't mentioned above, that has been observed in Stephen's guitar rig over the years.

How'd we do? Did this answer the question What guitar gear does Stephen Carpenter use? If you have seen Stephen playing additional guitar gear, add a comment below!