Dan Hawkins was the guitarist and backing singer of the awesome UK band, The Darkness and now plays lead guitar for their successor band Stone Gods.

If you listened to The Darkness, you know they had some awesome rock guitar tones. Let's look at what gear and equipment has been seen in Dan Hawkins Guitar Rig. 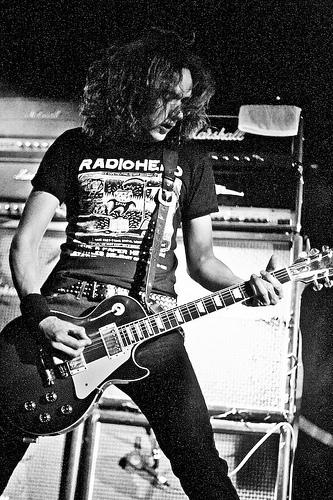 Guitars
- three Gibson Les Paul Standards fitted with PAF pickups, one in honeyburst ("Dune"), one in black ("Black Shuck") and one in cherry burst

- one Gibson Les Paul Standard fitted with a Seymour Duncan custom pickup at the bridge, a Burst Bucker 3 at the neck and a Fishman Powerbridge transducer, finished in white

- one Gibson SG, one Gretsch Malcolm Young Signature series and one Gibson Les Paul Custom Black Beauty (3 pickup) – these three are rarely, if ever, played live

Notes: One of his Les Pauls was owned by Jimmy Page

- Diezel heads??? - there is a Diezel in the above pic, although we aren't sure if it is Hawkins' amp