Although at times Trujillo has been known to use a pick, he prefers to use his fingers, like the early Metallica bassist Cliff Burton, but unlike Trujillo's predecessor Jason Newsted (who used a pick almost exclusively). He is also a very skilled slap bass player, as ably demonstrated in his work for Suicidal Tendencies, and particularly Infectious Grooves, where he used the technique extensively.

Let's look at what gear and equipment has been seen in Robert Trujillo's Bass Rig. 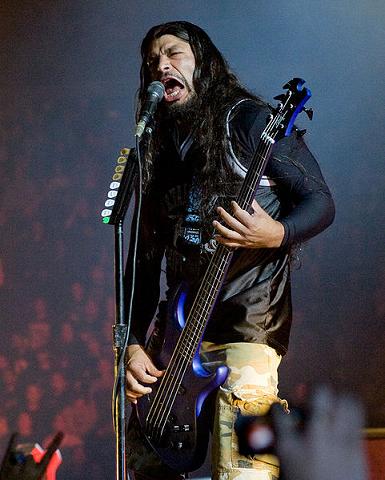 - In Aug 2008, it was announced Robert was using custom Yamaha basses. The basses are modeled after the TRB5PII and are "Rat rod" inspired.

- Prior to Metallica, he was most often seen to play Tobias ( 5-strings Classics and Basics), ESP and Musicman Stringray basses (all 5-strings), as well as a Fender Precision Bass with Black Label Society and Ozzy Osbourne

- Dean Markley Bass Strings - Magnum roundwounds with a heavy B (.130)