Marty Friedman is a guitarist perhaps best known as the lead guitarist for the thrash metal band Megadeth ( no, it's not spelled megadeath ) for close to ten years. He now resides in Japan. He hosted his own television programs, Rock Fujiyama and Jukebox English on Japanese television.

Prior to joining Megadeth, Marty Friedman formed and played lead guitar in several other bands, including Deuce, Hawaii, Vixen (not the all-female band of the same name), and notably Cacophony. Cacophony featured neoclassical metal elements and synchronized twin guitar harmonies and counterpoints shared with guitarist Jason Becker on their two albums, Go Off! and Speed Metal Symphony. Friedman also has been releasing solo albums for quite some time.

Being a shredmaster, Friedman has played on some cool guitar rigs and gear, which we researched for your viewing pleasure.

Let's look at what gear and equipment has been seen in Marty Friedman's Guitar Rig. 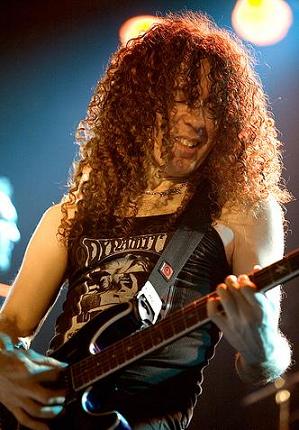 - Jackson Guitars (stopped using them in 2000 when Fender bought Jackson)

- Ibanez Guitars (has a singature model available in Japan)

- Ibanez Marty Friedman Model ( Ibanez MFM-1 signature guitar, which is basically an SZ model with stars on the frets and body)