Justin Chancellor is an English-born musician; currently the bass player for Tool and formerly of the band Peach. This guy provides the growling low end for Tool that we all love.

Let's look at what gear and equipment has been seen in Tool's Justin Chancellor Bass Rig. 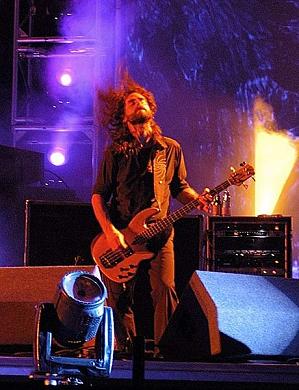 In this cool String Theory video, Justin is playing different songs on one of his gorgeous Wal bass guitars. Justin mentions his first guitar was something he received for his 8th birthday. When he was around 16 years old he had bought his first pack of Ernie ball strings. There’s pictures of Ernie Ball custom gauge roundwound bass strings on the mixing console, and you can see a gauge 85 and gauge 110 package. Justin opens a pack of Ernie Ball strings, and it appears to be the Hybrid Slinky 2833 bass strings, which he has been known to use for years (over 20 years).

Justin Chancellor's Basses
- Wal basses - Chancellor’s main bass is a Wal 4-string. The bass’s woods and electronics help create the midrange cut and punch for which he is known. Justin also has three other four-string Wals: a less midrangy copy of his main bass (used on Wings for Marie parts one and two), a Mach III with a greenburst finish (used on "Right in Two"), and a lined fretless with a walnut top (used in the second verse of "Lateralus").

TopGuitar (a European magazine) did a nice interview with Justin Chancellor at the Warwick Bass Camp. Five Wal basses. One is a fretless. He has two that are his main bass model. He also has some really cool vintage bass guitars – 5 to 10 really special ones. Justin shows off his vintage 1963 Fender Precision bass, lake placid blue color, which he says is really nice. Justin doesn’t want perfect looking basses because he’d be afraid he’d mess the bass up, so he likes vintage ones that are worn a bit. In the video he also mentions that he was probably going to buy a Warwick bass for his collection.

Here's a Lake Placid Blue Fender Precision Bass, that Fender has released as part of it's 60's American Original line, reminiscent of the vintage bass Justin shows off:

- Boss GEB7 Bass EQ - run into his 4x12 after the Turbo RAT for a grit channel, for a slight low end boost.

In 2010, Dunlop did an awesome video with Justin’s Tool Bass Tech, who gave a bass rig tour of Chancellor’s live bass gear rig. You can catch some awesome shots of Justin’s bass pedals on his effects pedalboard: