Daron Malakian is the lead guitarist in the Armenian-American metal band System of a Down. Malakian has written most of the band's music, and, more recently, has taken on a large share of the vocal work for the band as well. He placed 30th in Guitar World's List of "The 100 Greatest Heavy Metal Guitarists Of All Time." Daron also is the lead vocalist, lead guitarist, multi-instrumentalist, and songwriter of Scars on Broadway.

Our research uncovered that Malakian's guitar rig has consisted of a variety of different guitar gear, especially amplifiers over the years. Daron Malakian however doesn't appear to be a big pedal users - he just uses a few powerful guitar effects that do the trick for his sound. 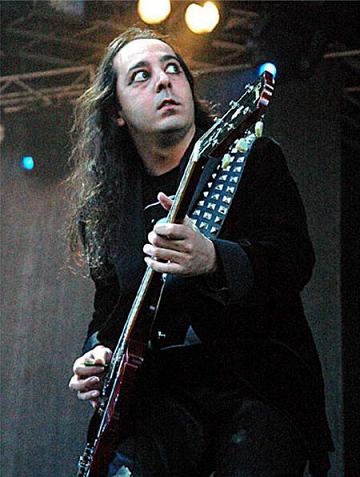 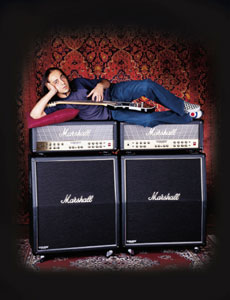 - Variety of Marshall cabinets (including MF 400)

Daron has also been known to use a variety of other guitar amps throughout his career including guitar amps from Orange, Matchless, Vox, Ibanez, and Carvin.

In late 2018, Ernie Ball released a String Theory episode featuring Daron Malakian. The String Theory interviews are great and give a mix of background info along with guitar gear discussion. This video shows Daron playing one of his custom Ibanez Iceman guitars (red snakeskin pattern with gold hardware) through two Marshall tube amp heads (appear to be 1959 Super Lead 100 watt heads) and two angled Marshall checkered 4x12 guitar cabs – hard to tell what model, the logo looks gold colored so possibly the Marshall 1960AHW cabinet. On the floor, you’ll observe his Ground Control pedal board, and effects pedals. On top of the Marshall amps there’s a rack filled with guitar equipment.

Daron talks about playing guitar and how he uses the guitar as a tool to write and structure songs. He goes on to discuss his interest and background in playing music and guitar and how it defines him. Daron says that he originally wanted to play drums when he was a kid, but ended up getting an Arbor guitar and a Gorilla combo amp when he was 12 years old instead. Daron’s discusses his musical influences which included a variety of metal bands such as Black Sabbath, but he then branched out to other bands like Grateful Dead.

Daron reveals that he’s always used Ernie Ball electric guitar strings. It looks like he’s using the Ernie Ball 2215 Skiny Top Heavy Bottom electric guitar strings, gauges 10,13,17,30,42,52. Those strings are sitting on what appears to be a stack of other guitar strings, one looks to be a purple package – likely the 2223 Super Slinky guitar strings that he used to play prior. There’s another shot around 8:22 in the video, where you can observe white custom printed Dunlop triangle picks next to his guitar strings. When he’s playing the guitar in the video it looks like he’s using a green one, which is probably a stock, non-custom Dunlop Tortex 0.88mm triangle pick.

Daron gives a ton more info about his guitar playing and songwriter.

Great picture that Daron posted on his Instagram of him and one of his custom Iceman guitars: