Mark Tremonti  is the lead guitarist for the American rock band Alter Bridge, but is most known as the former guitarist for the popular late 90's/early 00's band Creed. Tremonti writes music, lyrics and contributes backing vocals.

Mark Tremonti has a pretty sweet Guitar Rig. In this article we will look at what type of gear and equipment Mark has reportedly used in his rig.

Let's look at what gear and equipment has been seen in this Creed and Alter Bridge guitar player's guitar rig. 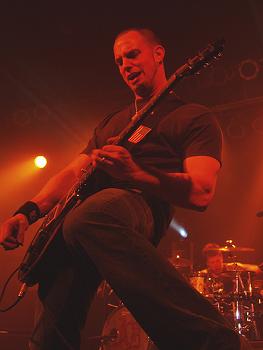 - Mark also owns a unique Dragon 2002 PRS guitar with the Mark Tremonti 12th fret. "It sits proudly behind glass in Mark's guitar display case and it will never be played because it is worth a mint! It also sits right next to Mark's autographed SRV guitar, the guitar signed and given to him by Metallica and another signed guitar given to him by Eddie Van Halen."

Effects and Other Gear

- Mackie mixing board for monitors

Strings and Guitar Picks
- Mark has used Dunlop Blue Tortex 1mm picks, but at the concerts, he hands out D'Addario Planet Waves 1mm picks which just has the Alter Bridge logo on one side and the planet waves logo on the other. He also has been said to use Jim Dunlop Jazz III picks. He also has been seen with Dunlop Nylon 1mm picks