Rivers Cuomo is the lead singer, guitarist, and songwriter of the "geek" rock band Weezer. His guitar rig has consisted of various gear and equipment over the past 15 years.

Before showing River Cuomo's guitar gear rig and equipment, Ihere are some cool facts about Cuomo.

Rivers Cuomo Graduated from Harvard University with a degree in English (2006). He actually lived in a dorm room.

"Weezer" the name of his rock band, is actually his childhood nickname.

Weezer was originally signed to record the main song for Shrek 2 soundtrack.

Was a metal head as a teenager.

Alrighty, enough fun facts, let's look at what gear and equipment has been seen in Rivers Cuomo's Guitar Rig. 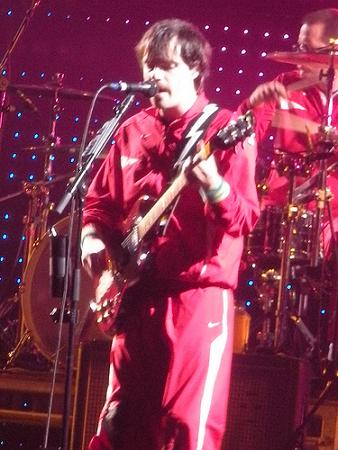 - Fender Stratocaster with two of the pickups replaced with a black Seymour Duncan TB59B1, AKA the "Trembucker 59", and a red and yellow DiMarzio "Humbucker From Hell"

- Red Gibson SG with the Thai word Farang on it, meaning "a white foreigner."

Effects and more
- Line 6 POD Pro - Weezer used these solely on some tours, without any amps or cabs.

- Talk Box (used on Beverly Hills solo. If you need proof, check the video of Weezer on Letterman)