Stevie Ray Vaughan was one of the world's most influential blues guitarists. In 2003, Rolling Stone magazine ranked Stevie Ray Vaughan #7 in their list of the 100 Greatest Guitarists of All Time. We want to see the guitar gear rig and equipment behind the man.

After some research, we've compiled a list of some of the gear and equipment that was reportedly in Stevie Ray Vaughan's rig. Much of the gear models is still availble on the open market.

Let's look at what gear and equipment has been seen in Stevie Ray Vaughan's guitar rig. 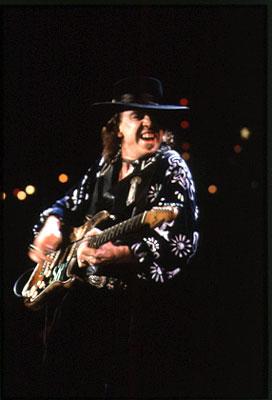 - Vaughan's main guitar was a beat up Fender 1963 Stratocaster which had a Fender `62 rosewood neck and was referred to as `Number One'. The body has the initials `SRV' on the lower part of the scratchplate and is fitted with a left-handed vibrato system. the neck was refretted with Dunlop 6100 frets.

Effects and other gear