Adam Dutkiewicz is a guitar player from the metalcore band Killswitch Engage. If you haven't heard of them checkout an awesome song of theirs called Rose of Sharyn. Adam attended Berklee and eventually formed Killswitch Engage in Massachuetts. Adam has produced records for Killswitch and many other bands. He's been known to work at Zing studios out in Western Massachusetts.

Let's look at what gear and equipment has been seen in Adam's guitar rig! 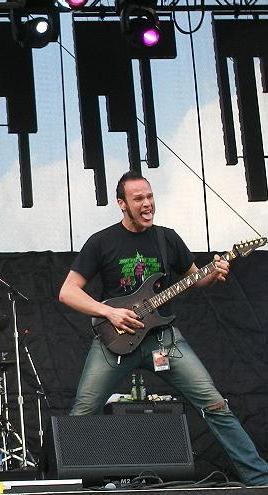 - Caparison PLM-3 guitars with EMG pickups (85 in the bridge, two SA single coils in the middle and neck positions)

- Fender Stratocaster with a Twin blade humbucker (way back)

- Orange Tiny Terror (used on "Take Me Away" for cleans)

- Fender Vibrolux (used on "Take Me Away" for cleans)

- Dunlop tortex picks (not sure exact model, but he said "small tortex" in the FRET12 interview)