John Mayer sure can rock out on a guitar whether it be a Fender Stratocaster, a signature PRS electric, or a Martin acoustic guitar. John Mayer is a great guitar player in addition to being a great singer and songwriter and is one of our favorite musician's here at UberProAudio. He's done an amazing job playing with the Grateful Dead guys in the band Dead & Company in addition to his very successful solo career.

John has used a ton of guitar gear over the years, and is quite the guitar equipment collector. In this article we'll explore tons of guitar gear that John has used, showing pictures, videos and more which should help provide answers for folks who are wondering what gear John Mayer uses, including what amps, guitars, cabinets, strings, picks, and effect are in his guitar rig.

Now, without further adieu let's look at what gear and equipment has been seen in John Mayer's Guitar Rig. 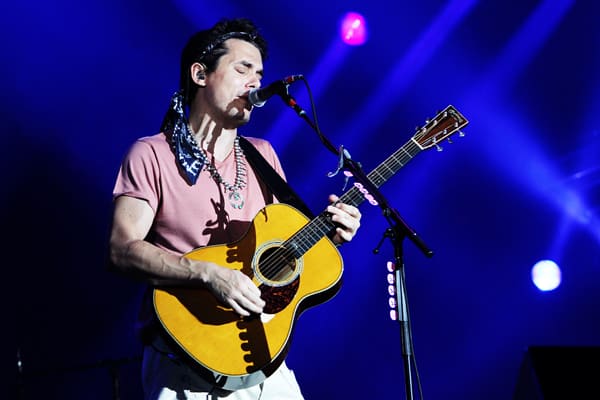 Here's a great picture John posted of himself playing the PRS guitar:

John posted some pictures of him on tour in 2019 using his Martin acoustic guitar. You also can see his pedalboard in some of the photos:

- Charvel Custom Shop guitar with skateboard inspired paint job. We saw him playing this as recent as 2019. It sounds like John got the Charvel guitar in 2017 and was using it on the Dead and Company tour also. Charvel x Powell Peralta “McGill” San Dimas model

- Ernie Ball Eddie Van Halen Wolfgang guitar, purple, custom built by Ernie Ball with parts they had stored away from 1991. John had asked them to make the guitar, as it was the one John had seen on the 1991 Guitar World cover.

Have you seen this classic video? It's a 2010 guitar rig rundown video that PG did with John Mayer's guitar tech, Rene Martinez. Rene was also the guitar tech for Stevie Ray Vaughan. We see that John was using a Fender Band Master amp head, a Two Rock John Mayer signature amp head, and a Dumble Steel String Singer guitar amp on this tour. Rene shows off John's Bradshaw system. There's a ton of drawers in the guitar rack and each drawer is filled with guitar effects pedals. Lower in this article, we document the pedals in the rack. After you see the guitar pedals that John Mayer uses, you then get a little walkthrough of the different guitars that John Mayer was playing on tour.

John posted a picture in 2017 saying that the PRS amp and cab is "the tone he's been looking for":

John was showing off his Dumble amp as recent as May 2019:

Here's a funny video of John talking to a live crowd about guitar effects pedals. It's hilarious - he talks about getting a reverb pedal that he used to write the song "Love on the Weekend".

NOTE: John's rig is complex and changes quite often. At any given time you might see a variety of pedals on John Mayer's pedalboard. As you've seen in the video above, one of John's hobbies is collecting guitar pedals. For example, in 2016 he posted a picture that showed just his Way Huge brand guitar effects pedals! In the picture you can observe the following guitar pedals along with many others in John's effects collection. 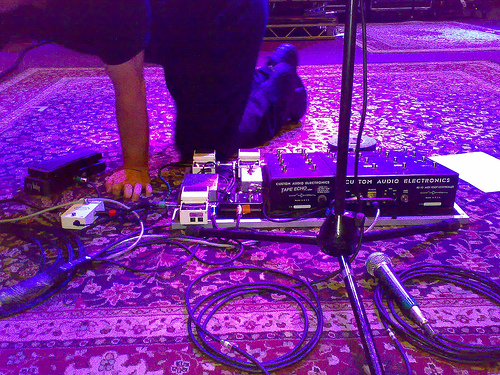 - D’Addario EJ16 light-gauge, phosphor-bronze strings on his acoustic. There were some old ads (2002) that showed him as a D'Addario user.

- Dunlop Tortex .60mm (as reported by one of our readers who caught a pick)

Here's a picture John posted of some of his older tour guitar picks:

- Ernie Ball Black guitar strap (as seen in many pics) 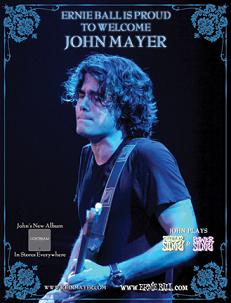 In 2015 John shared a photo of his traveling practice guitar rig - it's really nice! He uses a Kemper Profiling amp plugged into a Dumble 1x12 cab. There's also a Furman Power Conditioner in the rack - it appears to be the Furman M-8DX Power Conditioner.

Go to the next page for pictures of John Mayer's guitar amps, cabinets, pedals and pedalboard.

Here are some good pictures of John mayer's 2007 guitar rig, taken by j4mie and licensed under Creative Commons.