Scott Ian is best knows as the rythym guitar player from the heavy band Anthrax. You've also seen him on a variety of television shows such as Damnocracy. Scott is known for his long colored goatee and wild stage energy - checkout some Anthrax concerts.

Let's look at what gear and equipment has been seen in Scott Ian's Guitar Rig. 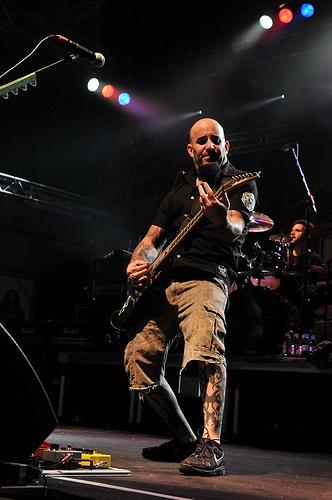 In an interview (guitar.com) Scott mentioned he is a fan of Brian Setzer and Malcolm Young, and he bought some guitars to try to learn their style:
- Gretsch Setzer model

- Jackson Soloist (with Yankees logo. Fretless from 12th fret up.)