Billie Joe Armstrong is best known as the lead vocalist and guitarist for the punk rock band Green Day. Armstrong is often credited with the revival of punk in the early 1990s with Green Day.

Let's look at what gear and equipment has been seen in Green Day's Billie Joe Armstrong's Guitar Rig! 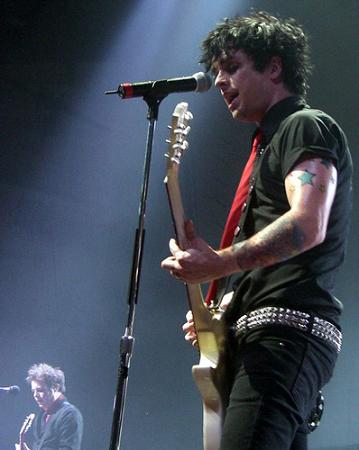 Notes: Billie has a huge collection of guitars, with the majority being Gibson. See Aug 09 Guitar World for pic.

- Gibson Flying V (white. Appears to be a Heritage model)

- MXR Carbon Copy (uses this pedal on "Kill the DJ")

Notes:
- Billie's guitar is a Fernandes Stratocaster copy he calls "Blue". On Nimrod he also used some Gibson's, some old Les Pauls, an ES-355, and ES-135 and a Fender Jaguar. He also made a guitar he call's "Frankenstein" because it is a combination of several different parts purchased at a Fender shop. Has a Seymour Duncan humbucker added to Blue.
- Billie mainly plays through a modified Marshall amp. On Nimrod he used a Fender Bassman, a Hiwatt, and a Leslie. The amp he uses on Dookie is most commenly reffered to as the 'pete' amp and can be seen most noticeably at the Woodstock concert, it has 'pete' written across it.