Yngwie Malmsteen is a Swedish guitarist, composer and bandleader. Yngwie is Widely recognized for his guitar skills, Malmsteen achieved widespread acclaim in the 1980s for his technical proficiency and his pioneering of the shred guitar technique, and neo-classical metal genre.

Let's look at what gear and equipment has been seen in Yngwie Malmsteen's Guitar Rig. 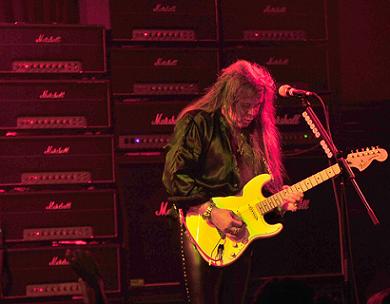 What's the deal with the Scalloped neck? - The guitars he uses are recognizable by the addition of custom scalloped fretboards. This is similar to a regular fretboard, but with wood 'scalloped' or scooped away to form a concave shape in between the frets.

The modifications Yngwie applies to his guitars are:

- Yngwie's most well-known guitar is his 1972 blond Strat, known as "Play Loud" or "The Duck" (because of the stickers on the body). Bought in Sweden when he was a teenager, this guitar has been with Yngwie from the start of his career, and is the one he has used most onstage and in the studio.

- Double neck guitar. Made by Fender of Japan, this specialty guitar features a twelve-string acoustic Malmsteen Signature top, with the Malmsteen Japanese Signature Strat on the bottom. The controls are separate for the two guitars.

- All live microphones are Shure SM57's

- Dunlop 1.5mm guitar picks (white with imprint of his name. Made out of delrin)