Brian May is an English musician best known as the lead guitarist and backing vocalist for the English rock band Queen. As a guitarist, he's known for his memorable riffs and solos, distinctive tone, as well as for the fact that he built (with his father) his own guitar, called the "Red Special". He is also cited as a pioneer of the delay effect. An interesting fact is that he also has had a long term interest in astrophysics, having recently completed his doctoral thesis in the subject. He received his PhD in Astrophysics.

Let's look at what gear and equipment has been seen in Brian May's Guitar Rig! 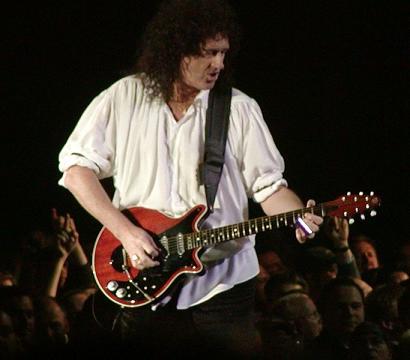 Guitars and other instruments

- The Red Special guitar (this has been his main guitar)

- Gibson Les Paul Deluxe (as a backup during the early tours)

- Deacy amp (reproduced by Vox as the "Brian May Special")

- Brian May Digitech Artist Series pedal. - It has all the Queen effects and settings built in

Interesting Fact: Brian May uses a English Sixpence from the 60's as his guitar pick. He also has custom Brian May Optima strings that are 24 karat gold plated.