Billy Sheehan is a Bassist known for his work with Talas, Steve Vai, David Lee Roth, Mr. Big, and Niacin.

Sheehan has won Guitar Player magazine's "Best Rock Bass Player" readers' poll five times for his "lead bass" playing style. Guitar Player has likened his soloing on the four-string instrument to Eddie Van Halen's on the six-string guitar. Sheehan's repertoire includes the use of chording, two-handed tapping and controlled feedback. However, Sheehan is also noted as a steady "true" bassist, fulfilling the traditional supportive role of the electric bass.

Let's take a look at what gear and equipment has been seen in Billy Sheehan's Bass Guitar Rig. 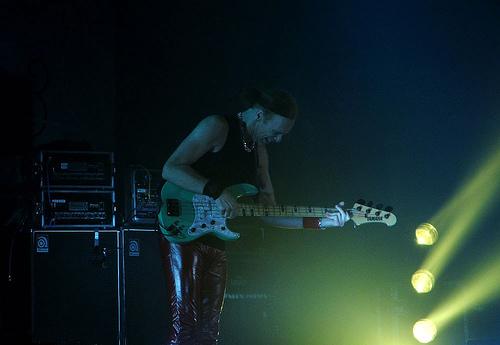 - Pearce BC-1 solid state dual channel pre-amp (no longer made. He uses it for distorted tones)

- Billy also plays guitar. When he plays guitar he has been said to use stone picks made from polished stone

- Some white triangle picks where taped to one of Billy's Hartke cabs......