Jack White is a musician, guitarist, singer, songwriter and music producer. White is best known as the guitarist and lead vocalist of the rock duo The White Stripes. Jack has also had a great solo career and founded Third Man Records. If you like Jack White and The White Stripes and want to know what Jack White's Guitar Gear rig and Equipment look like, then this is the article for you. Let's look at what gear and equipment has been seen in Jack's guitar rig. 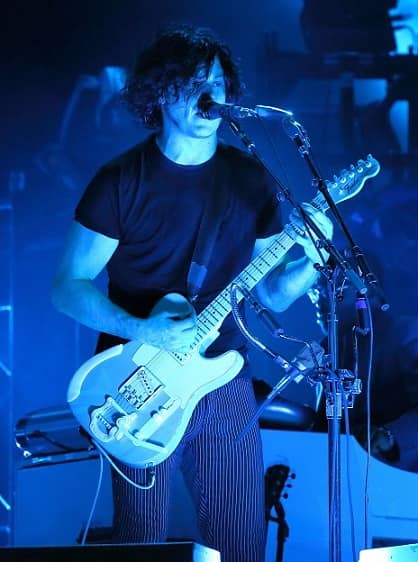 Many have been asking - What Eddie Van Halen guitar did Jack White use on his Saturday Night Live appearance in October 2020?

Answer: Jack used one of his custom EVH Woflgang model guitars. The guitar is blue and has black block inlays along with 3 pickups. On his Instagram post the day of the SNL show, Jack said that this EVH guitar "was designed by Eddie (with a few customizations I had added). Eddie was very kind to me and saw to it that this guitar was made for me to my specs." You can see Jack playing this EVH guitar here, along with a Fender Twin Reverb amp on SNL:

- Gretsch Triple Jet guitar (below is a double jet):

- Z.Vex Woolly Mammoth pedal (used one for the quantum of solace theme song, and also live)

- Either an Electro-Harmonix Holy Grail Nano or a Bassballs pedal (both look the same painted...)

Jack White shared a great picture of his 2020 guitar rig gear, which was used at the SNL show - observe the pedalboard which includes many of the pedals listed here along with his beautiful EVH custom Wolfgang guitar:
https://www.instagram.com/p/CGGxnDFJCPT/

Here's a cool as heck video of Jack playing on and demoing the Third Man Records guitar effects pedals - he's using a Gretsch Billy-Bo guitar in the demo: