Adrian Smith is one of the guitar players in Iron Maiden. But we didn't have to tell you that. I've experienced the electrifying show that Adrian Smith and Iron Maiden puts on and let me tell you - if you haven't seen Iron Maiden live, add that on your to-do list. Being one of the guitar gods, Adrian Smith's Guitar Gear and Equipment of course is something a mere mortal like yourself could only dream of having...or is it? Let's see what guitar gear and equipment Adrian has been seen using in his guitar rig....."Your time will come..." 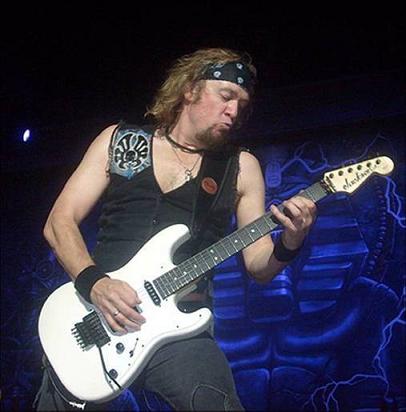 Notes: Smith's preferred guitar is the Fender Stratocaster, though he has used a variety of others over his career including several different Dean models, a custom built Jackson, Ibanez Destroyer, Gibson Les Pauls, a Gibson Explorer and Gibson SGs. On the A Matter of Life and Death DVD he says the first guitar he bought was a Gibson Les Paul Goldtop that cost him £235 when he was 17; he's still using it, and "it's still probably the best guitar I've got". He had to work on a building site all summer to pay for it.  Adrian uses gauge 9 strings and has his action set slightly higher than average.  For his solo work with Bruce Dickinson and with Maiden on occasion, he has used (at least live) a Jackson King V guitar tuned down to D, providing a darker and heavier sound. In the booklet of their album A Matter of Life and Death, Adrian is shown with a custom made two neck Jackson Soloist.

- A Fender American Stratocaster with a Floyd Rose tremolo system with a backup Fender.

- An early 70's Gibson SG with a backup Gibson.

For the Fender American Stratocaster:

For the Gibson SG: